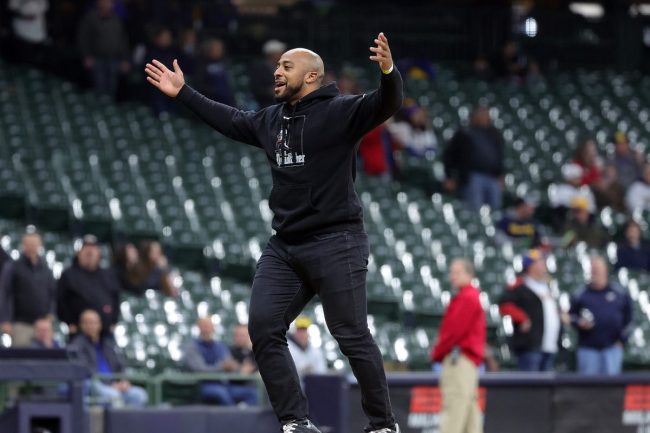 A security officer is getting trashed on social media after attempting to stop Packers’ RB AJ Dillon from doing the Lambeau Leap at a recent soccer game. The venue was hosting an exhibition match between Bayern Munich and Manchester City this weekend.

Unfortunately, fans were drenched by a rainstorm that passed through during the outing, causing a brief rain delay. That’s when Dillon hopped onto the field in an attempt to fire up the home crowd.

A Twitter user with the handle Atlas2686 posted a video of the running back on the field prior to the jump. It seemed that everyone on the field and in the stands was in on the Lambeau Leap until one member of security tried to step in.

The security guard actually grabbed Dillon by the collar of his shirt before the bruising back explained to him what was going on. He then gave an unnecessary push, which caused the crowd to boo the officer.

He must not have recognized Dillon, or else he might’ve had a different reaction. He surely didn’t see the recent viral clip of the running back trucking a mascot at a minor league baseball game. Dillon could likely snap him in half.

The back was a good sport, de-escalating a situation that could’ve easily turned ugly. He explained what happened in a post on social media Sunday.

AJ Dillon responded to the Lambeau Leap clip, saying that he’d gotten the ‘OK’ from the security team before going onto the field.

Below is the running back’s entire reaction.

Two security told me and helped me come down to the field during the 30 minute rain delay, so I could do a lambeau leap and hype up the crowd… I’m assuming he missed them telling me to come down. https://t.co/fxbKKtfhUW

He says he guesses the one officer missed the rest of the crew telling him to come down onto the field.

Dillon didn’t overreact, though no one would’ve blamed him after that final push. He completed the leap before slipping back into his seat at Lambeau to enjoy the rest of the match.