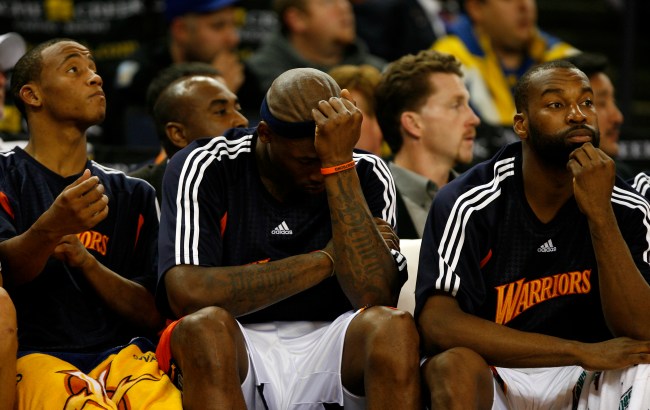 Al Harrington entered the NBA before most American men lose their virginity.

At the tender age of 18, frontal lobes are still developing, acne is your worst enemy, and one still possesses a youthful optimism that has yet been tarnished by growing up.

Harrington, who is now a marijuana industry mogul, somehow avoided the pitfalls associated with stardom, adolescence and deep pockets, claiming to have not taken a sip of alcohol until his fourth year in the league.

The 16-year NBA veteran joined us on our Endless Hustle Podcast to describe why his motive for withholding and why a team dinner at Ruth’s Chris Steakhouse in 2008 resulted in him smoking the devil’s lettuce for the first time in the league after a decade of abstaining.

“I was paranoid in my room. I heard sirens & ambulances. I didn’t know what was going on. They gave me too strong a product for my first time!”

“I grew up in a family where addiction was a huge issue. I’ve had uncles that drank themselves to death. I’ve had family members that have OD’d. My mom always told me to be careful because I may have that gene in my body. You know, that I might end up a crackhead. So I was just afraid of it all.

The first time I actually smoked was with my team. We were in Phoenix and I was with Golden State and we were all sitting at Ruth’s Chris watching the game.

We needed the Clippers to beat the Nuggets so we’d get the 8th spot. Of course, the Clippers are the Clippers. They lose, so we know that our season in over.

But we still got a game tomorrow, it’s the last of the season.

So everybody’s all frustrated because we just had the “We Believe” year before that and we were a better team. That year I remember we brought in Chris Webber and tried this experiment for no reason. A washed-up Chris Webber. Chris is my guy but he knows he was washed up at that time. We put him in the starting lineup and lost like seven games in a row, and then we end up missing the playoffs by one game. But that’s a whole other story.

So we were sitting in our room and they just fired up. And they’re like, ‘Al, you’re smoking tonight. You got nothing to do tomorrow. We got this bullshit game.’

And I smoked, and we were supposed to go out that night and I didn’t make it out.

I was so paranoid in my room. I heard the ambulance. I heard sirens. I didn’t know what was going on.

So they gave me too strong a product for my first time.”

Harrington is now the founder and CEO of Viola, one of the nation’s leading producers and licensed wholesalers of premium quality cannabis products. He’s now on a mission to make 100 other black millionaires in the weed industry.

Listen to the whole Al Harrington podcast below. We discuss:

10:25 mark: Al discusses how he went from being “scared” of cannabis to smoking for the first time with his NBA teammates.

15:43: How he pissed Larry Bird off after being drafted out of high school by the Pacers.

@alharrington3 joined our @endlesshustlepod podcast and discussed a defining physical attribute of his former coach. Could this be why younger generations refuse to put respect on Larry Bird’s name? We will not let that happen. Harrington also talks about how getting his grandmother high lead to him becoming a marijuana mogul, the prevalence of weed in the NBA, Michael Jordan’s brutal trash talk, and much more! Tune in and subscribe to Endless Hustle podcast wherever you pod.