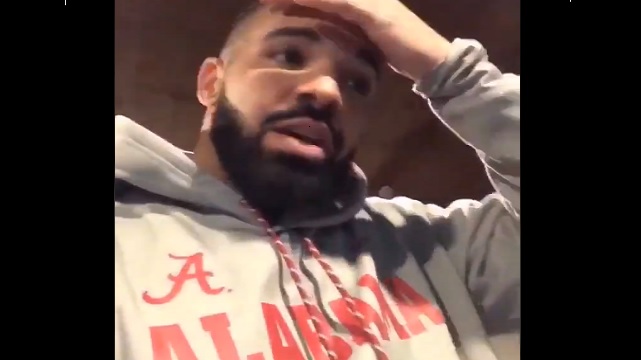 If Drake roots for your team before a big game it’s pretty much a lock that you’re going to lose the game.

Last week Drake was seen rocking an Alabama hoodie which was bad news for Bama.

Get your mind right!
Motivation from – @Drake repping Bama!#OutworkYesterday#RollTide pic.twitter.com/Pv0nK6JEjt

Alabama got their asses kicked by Clemson tonight and Bama fans blamed the Drake curse for the team’s downfall.

I want Drake deported. Someone please build a wall around Drake’s crib till football season is over… 😏

There is only one thing in this world more powerful than the Kardashian curse… The Drake curse. #CFBPlayoff pic.twitter.com/0JLOcHWSen

Hey @Drake I’ll give you $20 a week to wear our opponents hoodies every week next year.

The Drake curse is real as fuck 😂😭

There’s no other explanation.
There’s too much evidence that supports it at this point.

Fuck Drake for this loss, yo

The look when Drake might have actually cursed Bama 😳 pic.twitter.com/Yusb7jsqQz

how are we gonna explain to our kids that Drake took down the most powerful dynasty in modern college football?

Drake is 5 for 5 losing bets on Championship Games… #DrakeCurse

Somebody get @Drake a Tom Brady jersey pic.twitter.com/T4EtDlkBqb

The Drake curse is very real and in FULL effect! #CFBChampionship pic.twitter.com/4hAd2iNhfT