Alabama Football Has The Fastest Tee Recovery Guy In College Football And He Is All Gas, No Breaks 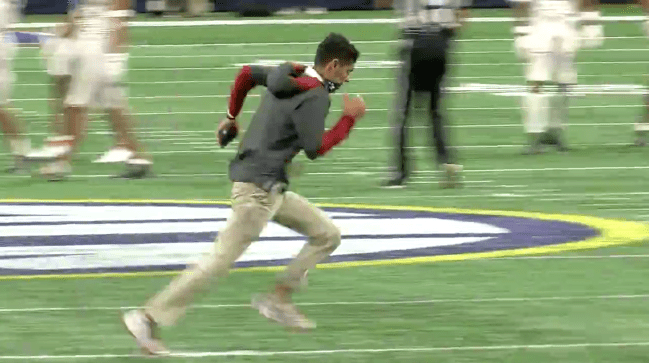 Alabama football held off a late comeback from Florida to win the SEC Championship on Saturday and earned the No. 1 ranking in the College Football Playoff. However, the real storyline came on the sideline with the Tide’s student manager and resident “tee recovery guy.” He plays a very important role that will typically go unnoticed— getting the kickoff tee off of the field when the special teams play is over. In this instance, however, he garnered some attention with his absolutely BLAZING FAST WHEELS.

The Crimson Tide have Heisman Trophy candidates in both quarterback Mac Jones and wide receiver Devonta Smith. The latter caught 15 passes for 184 yards and two touchdowns while the former threw for 418 yards and five touchdowns on 33 completions. Nick Saban’s team has been virtually unstoppable from the jump and it looks like they are well on their way to yet another national championship against Clemson. Part of the team’s success is based around the inability to accept anything less than 100 percent effort in everything its players do. That notion carries into the staff and the hustle is real.

To put his speed in perspective, a football field is 53.5 yards wide from sideline to sideline. That means that each third, delineated by hash marks, is 17.83 yards. The Alabama manager runs about a yard and a half short of the far hash— about 34.16 yards. 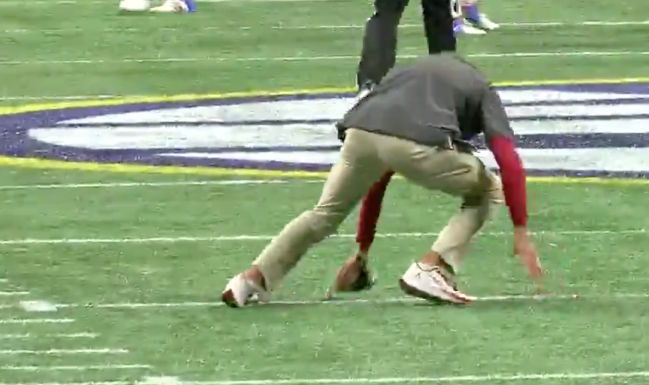 He grabs the tee in a fairly smooth transition and turns back to finish through the sideline with a head nod, as though it was Usain Bolt crossing the line in the Olympics. The effort is exceptional. His foot fully plants on the turf around the 4.73 second mark. By that measure, he is on pace for a 40-yard-dash time around the 5.52 second mark. To cover approximately 64.32 yards, it takes him 9.61 seconds.

That paces him around a 5.6 second 40-yard-dash with a change in direction midway through. Pretty impressive from the grad assistant and/or student manager. The Saban philosophy of never taking a play off and always going full speed really reaches all levels of the program.