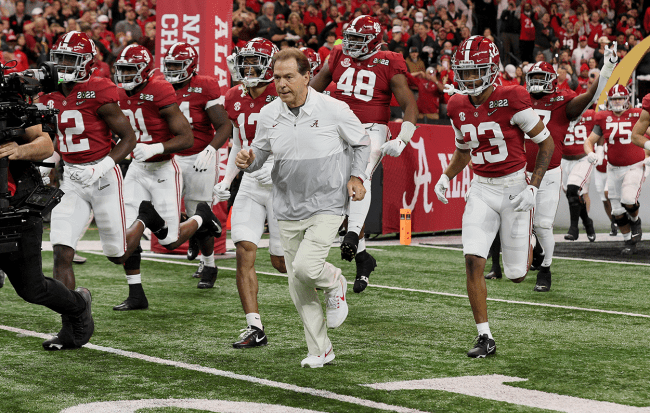 After falling to Georgia in an extremely exciting College Football Playoff National Championship in January, Alabama football is back on the field. The Crimson Tide began spring practice on Monday and they have their eyes set on a national title once again.

As is typical of Alabama, the roster from last year saw a lot of players head for the NFL or transfer out to find playing time on a less busy roster elsewhere. And as is typical of the Crimson Tide, they reloaded.

Nick Saban and his staff landed the No. 2 recruiting class in the nation this year. The class consisted of 25 prospects— three five-stars, 19 four-stars and three three-stars. All of them are very good.

Of the more than two dozen recruits, some of them chose to enroll early at Alabama to have an opportunity to compete in spring practice. Of those who did, three in particular do not look like would-be high schoolers finishing up their senior years.

Yeah, some of these Alabama freshmen don’t look like freshmen. pic.twitter.com/E296kSXM0O

Alabama’s spring practice schedule will continue through April 16th when the Crimson Tide holds its annual A-Day Spring Game. That will give the larger-than-life freshman their first opportunity to play at Bryant-Denny Stadium in front of a crowd.