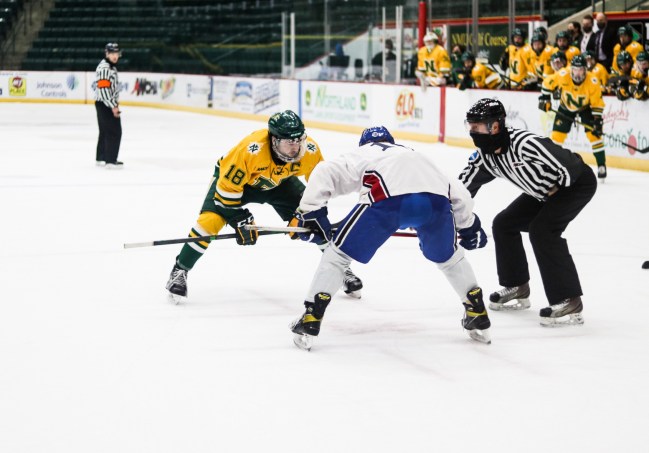 The University of Alabama-Huntsville might be the most unlikely program in the country, but it is consistently in the NCAA Tournament mix and even won a couple of DII national championships before moving up to the DI level in the late 1990s. As such an isolated program, UAH is forced to travel quite a bit for its away games and doing so amidst an unprecedented winter storm across the middle of the country caused for a last-minute uniform change on Tuesday.

For whatever reason, the team’s jerseys missed the flight up to its game against Northern Michigan separately from the helmet, pads and pants. This isn’t super uncommon in collegiate athletics, as the equipment managers often travel separately from the team and are the ones doing the laundry, but it created a snafu in this instance. When the Chargers arrived in the upper peninsula of Michigan, which is actually further north than parts of Canada, their blue road jerseys were stuck in dangerous conditions as an unprecedented snowstorm hammered the south and much of the middle of the United States. With no time to ship them up to the Wolverine State, UAH borrowed uniforms from a local team, Fox Motors Hockey Club.

Here’s a closeup of the Fox Motors jerseys that my wife took pic.twitter.com/AaRAOOlZeJ

Fox Motors club is a AAA juniors team outside of Grand Rapids, Mich. which is about six hours from where the game was played. The distance begs the question of how UAH ended up with Fox Motors jerseys, but they worked. The Fox Motors/Chargers went on to win their first road game of the season and third game overall.

Alabama-Huntsville is scheduled to play three more games in Michigan before heading home at the beginning of next week, beginning with game two of a two-game series against Northern Michigan tonight. As of now, it looks like they will have their UAH sweaters tonight. Someone within the athletic department flew with the jerseys to Chicago late on Tuesday and met two of the managers who were already in Michigan and drove down. They then drove through the night to Milwaukee, Mich. and made sure that the team can suit up in their own uniforms on Wednesday.