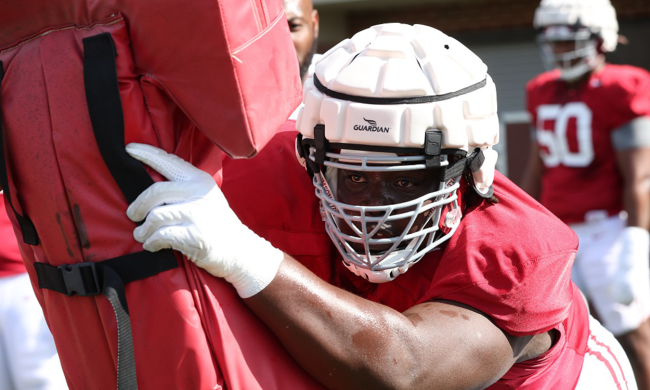 And when you look at the roster for 2022, things only get more frightening for the 12 “Davids” that have to try to take down Goliath.

Of the players who were not even on the team last season but are set to make an impact this fall, Jaheim Oatis stands out. The former four-star defensive lineman in the Class of 2022 chose Alabama over seven different SEC offers and enrolled early for the spring semester.

Oatis, who once buried an unsuspecting kicker six-feet under the ground in high school, is a very, very large man. He stands 6-foot-4, 342 pounds.

However, he was not down to his current weight until recently. Oatis underwent a significant weight transformation after his arrival in Tuscaloosa.

After weighing almost 420 pounds as recently as January, Oatis has dropped 75 pounds to reach his target playing weight of about 340. He looks like an absolute monster, and even on the collegiate level at his new weight, he is a man amongst boys.

To make him even more of a quarterback’s worst nightmare, Oatis is also a freak athlete. The true freshman, at his size, can throw down a full backflip.

In a recent video from the lake, Oatis looks lean and mean as he throws himself into the air for a full rotation before landing in the water.

Oatis shared (via Twitter) he weighed 416 pounds following his senior year of highschool, now he is 342 — he’s lost 74 pounds.

If someone who is as big as Oatis is can throw down a backflip with such ease, imagine what he can do to evade the block. Look out SEC, Jaheim Oatis is coming.