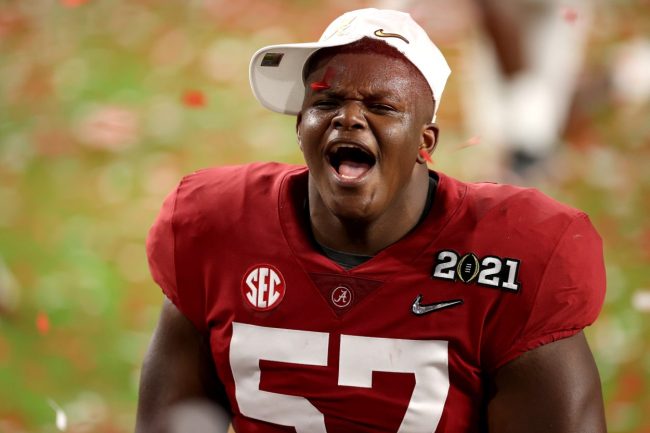 Auburn football finished the 2021 season at 6-6 and earned a bid to the Ticketsmarter Birmingham Bowl. The game will be played on Tuesday, and as a result, the Tigers were forced to have a morning practice on Christmas day.

Meanwhile, in-state rival Alabama does not play until Friday in the College Football Playoff. Thus, the Crimson Tide got Christmas day off.

With all of the free time, offensive lineman Javion Cohen decided to gift himself with a laugh. He drove from Tuscaloosa to Hoover, where Auburn is practicing, and trolled the Tigers with Alabama’s 2021 team celebration.

As we turn our attention to Hoover High 😂😂.. pic.twitter.com/Piu0OiPj4K

Earlier this year, the Tide adopted the ‘Crane Kick’ from ‘Karate Kid.’

In Week 4, against Southern Miss, the ‘Crimson Crane’ was born. Wide receiver Jameson Williams took a kickoff 83 yards for a touchdown and debuted the kick.

Since then, the vast majority of Alabama’s scoring drives have been capped by the celebration. And then things got cranked up a notch in the Iron Bowl.

The Crimson Tide was held scoreless through the first 52 minutes of the game, which meant that ‘The Crane’ was nonexistent. In turn, Auburn punter Oscar Chapman decided to mock Alabama after hitting his second-straight punt inside the 5. 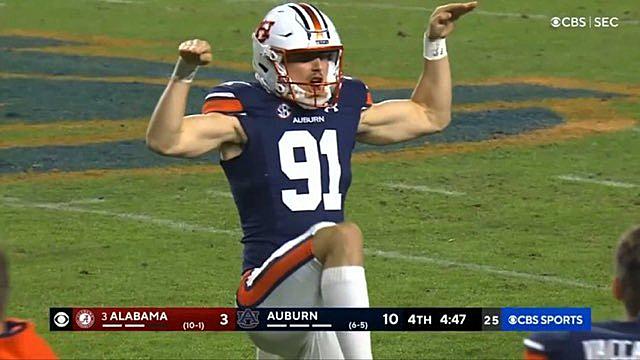 It was a big mistake. Alabama got the last laugh.

After winning the game, ‘The Crane’ was on full display.

Since then, the celebration has reached the basketball team.

And it even made an appearance in the NFL.

On Christmas day, it made another appearance in Hoover. This time, as it was after the Iron Bowl, it was right in the faces of the Tigers.

When Auburn opened its practices to the public, it probably didn’t expect a current member of the Tide to show up. Cohen had other ideas and trolled his rivals one final time in 2021.