Alabama Star Will Anderson Has Wild Message For His Opponents 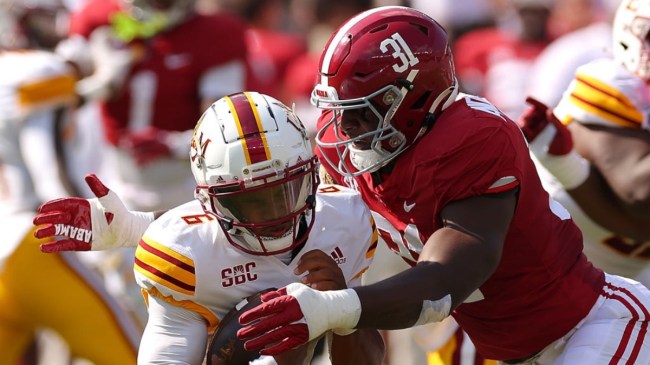 Will Anderson is just better than most of the people that he steps on the field with from weekend to weekend. That’s a fact. It’s why many believe that he could be the first player taken in next year’s NFL Draft.

#Alabama LB Will Anderson on if he considers himself to be hateful on the field: "Yeah, I do. I tell people all the time that the audacity for the other team to even step on the field is disrespectful to me."

There isn’t much of an argument to be made against this for some of the opponents Alabama has already faced this season. Utah State, Louisiana-Monroe, and Vanderbilt all didn’t really have anything to offer Bama on the field.

However, this quote from Anderson will definitely serve as bulletin board material for the much tougher opponents Alabama has ahead. Anderson and Bama still have to travel to Arkansas this weekend, 8th-ranked Tennessee, and #14 Mississippi. If they get through all of those tests, then they’ll have the defending champions waiting for them in the SEC Championship Game.

Anderson has shown the ability to back up this statement over the course of his college career. Over the past 2 seasons, he has racked up 121 tackles and 22 sacks in 19 games.

If Anderson keeps putting up numbers like that, there won’t be many who can question this statement.