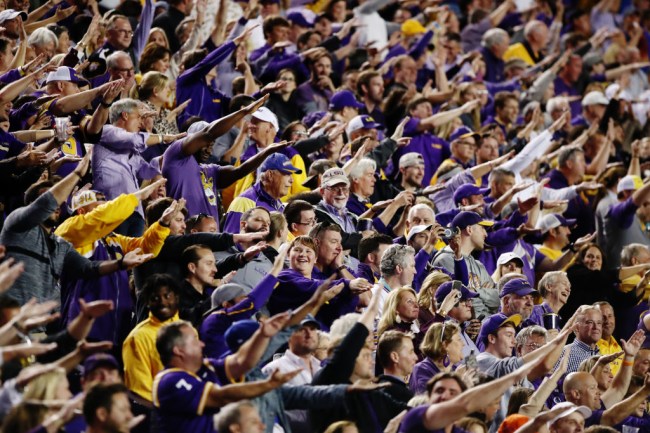 Outside of LSU sending a message to the rest of the college football world with its 14-point win over Florida on Saturday, something else went down in LSU’s Tiger Stadium.

According to TMZ, a 19-year-old Alabama student was arrested over the weekend for allegedly calling in a bomb threat to the stadium. The reason behind the alleged threat? His friend was on the verge of losing a bet on the game.

Safe to say his friend had the Gators catching 13 or so points, which they, of course, did not cover.

Cops say they were able to track down Connor Bruce Crollright after the bomb threat — and he reportedly fessed up right away … saying he wanted to stop the game because “his friend was on the verge of losing a large bet.”

According to jail records, Connor Croll was booked as a “fugitive from justice.” He’s being held without bail and expected to be hit with criminal charges including making a false bomb threat on school property.

This is taking the SEC’s motto of ‘it just means more’ to an entirely different level.

You can just picture the scene here.

He and a few buddies probably put some money – which they probably didn’t have – on the game and were feeling good about things as it was a back-and-forth contest for the majority of the game. Then things turned on the Gators after they threw a pick in the endzone late and this guy allegedly had the bright idea of calling in a bomb threat to a stadium with over 100,000 people in it.

That is not the move, chief.

According to The Tuscaloosa News, the protocol was followed after the threat and included an immediate sweep of the stadium which led to the arrest just minutes after the threat.