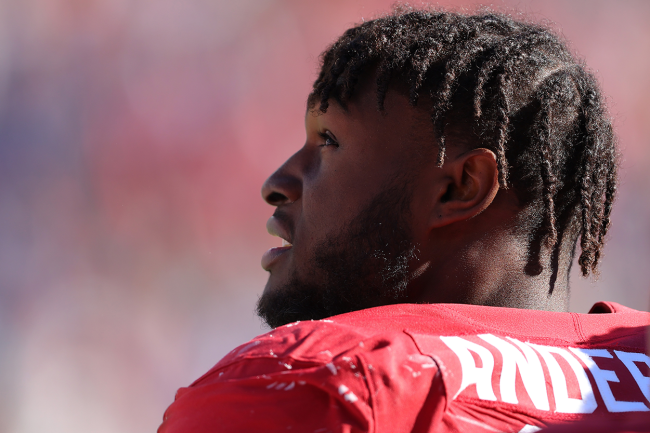 Alabama outside linebacker Will Anderson Jr. stands 6-foot-4, 243 pounds of pure muscle and demolishes everything in his path. That doesn’t mean he doesn’t have a soft spot.

When Anderson is on the field for the Crimson Tide, he is a heat-seeking missile. His performance last season was one of, if not the best by any defensive player in college football and should have earned him a Heisman Trophy invitation. Instead, he has his sights set out on winning the award in 2022.

During a recent appearance on the Paul Finebaum Show, Anderson shared his goal for 2022 and put the SEC on notice. In addition, he revealed his wholesome pregame tradition that keeps him grounded and centered before every game.

Family means a lot to Will Anderson Jr., so when they are in attendance at his games, he has a little bit of extra motivation to succeed.

“Honestly, that’s one of the biggest things I do,” Anderson said. “If I have a quick minute, I try to peek and see where they’re at, of course I know they’re there but just to see their faces. My parents mean a lot to me.

“When I know they’re at the game and I know they’re seated, when they’re not late, when I know they’re there, it just makes me even more excited because I love playing in front of them. I love them watching me play, i know it brings them a lot of excitement. I try to peek in the stands here and there like, ‘Where mom and dad at?’ That’s a little side thing about me, I do peek to see if they’re sitting in the stands or not.”

Anderson’s dad, mom, and five sisters all contributed to his success. However, he says that it is his father who really helped him become the man and player that he is.

“He’s meant everything to my career,” Anderson said. “My dad’s a big influence on my life, sports-wise and not even sports-wise, just overall. He’s done so much for me. He keeps my head sharp and he’s a great person to talk to just whenever I’m going through something. He’s been a tremendous dad.

“I give all the praise and love, and a big shoutout to my dad because my mom, she overtakes everything because she’s a big football mom and my dad stays in the back, but I have to shoutout my dad because he’s done a tremendous job raising me and getting me to the point where I’m at. Putting me in training, he was working late nights but in the morning, he would try to talk to me and stuff like that. He’s been a big help in the whole process I’ve been going through.”

Family is important to Anderson. If he wants to win the Heisman this fall, maybe he should make sure they’re in the stands for every game!