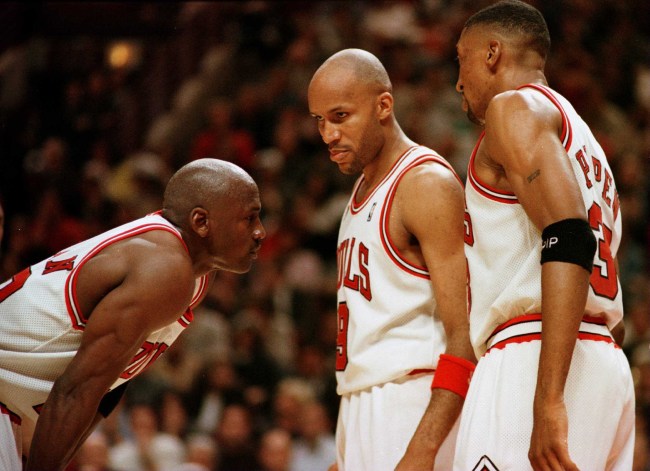 If you ask any ’90s kid about The Alan Parsons Project, a rock band which first formed in 1975, they’d probably be clueless on knowing much about them. While the British group did have some popular songs in the States, many of them were tunes most younger people only heard a few times — without actually knowing the artist who sang them.

Of course, that all changed when the Chicago Bulls chose The Alan Parsons Project’s Sirius as the introduction song for their iconic championship teams. Much like Michael Jordan’s wagging tongue before a big play, or the popular team chant before games — “WHAT TIME IS IT? GAME TIME, WOO!” — Sirius became recognized as being part of the intimidation of those great Bulls teams in the ’90s. In a weird and random way, it became the team’s official theme song, and it’s still recognized as such decades later.

But how did Sirius even become part of that winning culture? Why, of all the songs available to choose from, did the Bulls pick this intense, instrumental track? According to former Bulls PA announcer Tommy Edwards — who was a former DJ in the early-80s — it was simply a matter of playing at the right place at the right time.

Edwards, who walked away from his post with the Bulls in 2019, spoke with NBC Sports prior to retiring about the history of The Alan Parsons Project’s Sirius relating to the team. The song, which was first used for intros at Bulls games in 1984, is still played before the team’s starting lineup — and it all started with a simple approval from both the team and then rookie Michael Jordan 30-plus years ago.

Back in 1984, Tommy Edwards settled into his seat at the Biograph Theater to catch a movie with his wife when some ambient music started playing in the background.

“I told Mary Lou, ‘I know this song. It’s Sirius by the Alan Parsons Project,’” Edwards, a longtime disc jockey and radio programmer at WLS, said, referencing his wife. “The more I listened to it, I’m thinking, ‘Wait a minute. This could be the Bulls’ song.’”

The next day, Edwards bought the vinyl album, put it on his turntable at home and started practicing the Bulls’ starting lineup behind it.

“And because it has so many great parts to its intro—a new guitar part or crescendo—it worked great,” Edwards said. “The Bulls loved it immediately. Michael (Jordan) loved it. That’s been the opening lineup music ever since.”

And, just like that, the Bulls and The Alan Parsons Project would be forever linked together. But it didn’t come without a few other ideas from Edwards first, who was tasked with finding the right song to introduce the then rookie Jordan to help bring some in-game entertainment to the crowd.

When the Bulls drafted Jordan, marketing officials worked with Edwards to come up with something special for the potential star. They had already teamed to be the first in the league to turn off the lights for starting lineup introductions in 1977. At first, Edwards used Michael Jackson’s “Thriller” to introduce Jordan and the other starters. Some games, he’d experiment with the theme song from the hit TV show “Miami Vice.”

And then Edwards heard “Sirius,” the instrumental introduction to the song “Eye In The Sky.”

It took a lot of randomness for The Alan Parsons Project’s Sirius to become the official intro for the Chicago Bulls — like Tommy Edwards hearing it at that movie theater in 1984, recognizing the tune and knowing the artist, and then getting approval from both the team and Michael Jordan to use it. But, nearly four decades later, it’s still the soundtrack to those championship squads, and will forever be linked to the greatness of their dynasty.