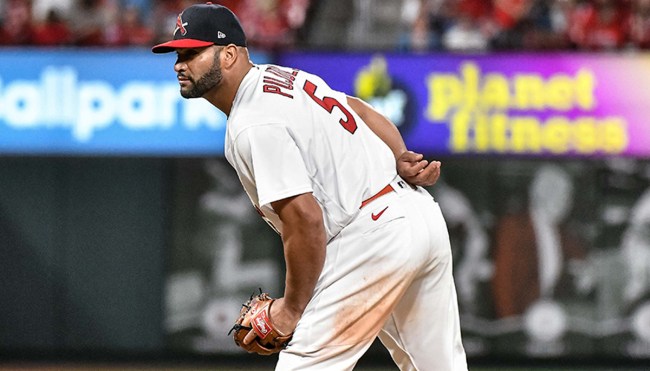 There’s nothing particularly enjoyable about getting blown out in a Major League Baseball game when you’re on the losing side. With that said, those contests have consistently created some incredibly entertaining situations courtesy of a move many teams pull out when a showdown gets particularly out of hand: calling in a position player to pitch.

In the vast majority of cases, that strategy is deployed by a squad that has decided to wave the white flag and preserve the arms of the guys in the bullpen by tapping someone who normally plays in the infield or the outfield to take the mound.

This has led to plenty of funny moments over the years, including the one we were treated to earlier this season when Travis d’Arnaud pretended to recoil in pain after second baseman Dee Strange-Gordon hit him with a pitch that was slower than what you’ll typically see on a Little League field with a 200-foot fence.

On Sunday, we were treated to another amusing incident courtesy of the St. Louis Cardinals. After heading into the top of the ninth inning against the Giants on the right side of a 15-2 rout, they decided to hand the ball to none other than Albert Pujols, the 42-year-old veteran who’s spent most of the recent campaign serving as a designated hitter and had never thrown a single pitch in an MLB game prior to the weekend.

Pujols would ultimately surrender four runs after the Giants mounted a futile rally (his career ERA is now sitting at 36.00 as a result). Evan Longoria did what he could to contribute during the frame when he managed to hit a 58 MPH pitch into left field for a single, which led to a great moment when he asked to keep the ball as a souvenir.

Evan Longoria asked for the ball after getting a hit off of Albert Pujols 🤝 pic.twitter.com/lnVb89AqlJ