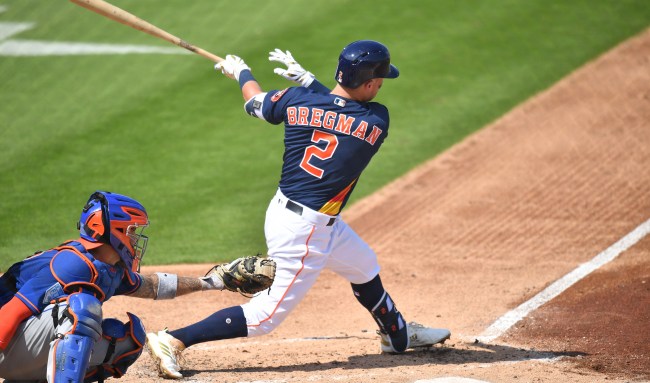 Alex Bregman, the 24-year-old All-Star infielder for the Houston Astros, knows a thing or two about baseball – especially college baseball.

While playing baseball in college for LSU, Bregman was named the 2013 National Freshman of the Year – winning the Shortstop of the Year Award, was voted first-team All-American in 2015, and was one of four finalists for the 2015 Golden Spikes Award.

So when he rips the NCAA for a rule change he thinks is stupid (and it is), he would know.

On Sunday, Bregman re-tweeted a video of a Duke batter being hit by a pitch during a game versus the University of Virginia. Why? Because the batter was… called out. Seriously. That’s something that can happen in NCAA baseball now.

According to 12up.com, the NCAA instituted a rule hit-by-pitch rule change for the 2019 and 2020 seasons that reads like this…

​​”To penalize the batter with a strike and not award first base if, in the judgement of the umpire, the batter makes an intentional movement to be hit by a pitch, regardless of where the pitch is located.”

Rationale: “To provide guidance in enforcing the hit by pitch rule and to deter batters from attempting to be hit by the pitch. “Freezing” by a batter is not considered making an intentional movement. A batter who freezes inside the batter’s box and who is hit by a pitch shall be awarded first base.”

This is when the ball hit the batter....is he leaning in to the pitch? Of course not....and they even reviewed it and still got it wrong. Terrible rule, terrible call, terrible review. pic.twitter.com/TFdKaOx82T

Then, after reviewing the call… they upheld it.

When did the NCAA begin hiring NFL referees to umpire baseball games?

As a coach of youth players we always taught hitters to defend themselves by sticking there backside out and rolling with the ball. This is an absolute ridiculous rule that has to be changed before players start hurting themselves by trying to play dodgeball.

You know it’s a bad call when no one in the opposing dugout is cheering.

On the plus side, at least this hit-by-pitch call didn’t end the damn game.

Here’s another example to end a game. pic.twitter.com/OlBovOVQgH