Alex Caruso Talks Getting Arrested, Trash Talk In The NBA, And Playing In Chicago In Awesome Interview With Pat McAfee 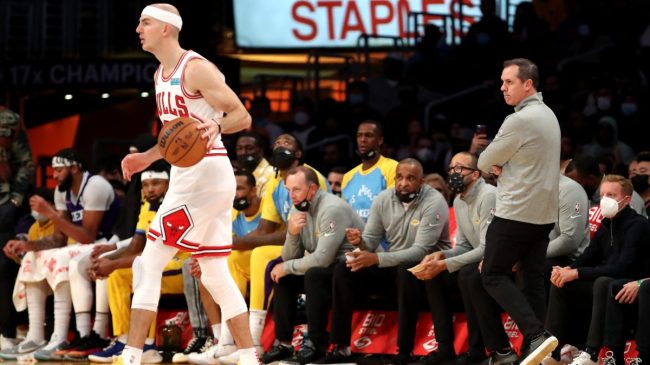 Alex Caruso is a great interview.

The NBA star sat down with Pat McAfee on Thursday to discuss a wide array of topics surrounding his basketball career. The two talked on how he’s enjoyed his time in Chicago, as well as his relationships with notable hoopers around the league.

Caruso experienced a breakout season with the Bulls in 2021. He saw career highs in minutes played, rebounds, assists, and steals. The guard helped lead Chicago to 46 wins and the sixth seed in the Eastern Conference.

Unfortunately, Caruso’s time in the playoffs was short lived. The Bulls were ousted by the Bucks in the first round, falling 4-1 in the series. Still, his progress in 2021 gives the team a vision for the future.

He spoke on his time in Chicago, shouting out the fans for providing an awesome gameday environment.

How was your season with the Bulls?

“Everyone knows the history of the Bulls… The fans, in general, they’re good sports fans. Chicago citizens know the game and they understand football, baseball, and basketball. They know what a good play is, what a bad play is. There were a couple games this year where we got booed because we played like shit, fittingly.

“I love playing in Chicago. I love Billy Donovan. I love the front office. I love our team.”

While he enjoys his time in Chicago, he’s still got relationships with teammates from the Lakers. He was asked about LeBron James, specifically, to which he responded, “He’s just one of the guys.”

"I have a great relationship with LeBron James & off the court he's just one of the guys" ~@ACFresh21#PMSLive pic.twitter.com/DPuwbS3dMa

Caruso got some laughs in while talking about trash talk in the NBA, as well as his arrest for weed in a Texas airport.

"You talk shit to some guys in the NBA & they wake up.. I got away from that early in my professional career" 😂😂 ~@ACFresh21#PMSLive pic.twitter.com/WqUtgqYbi5

He avoids trash talking in the NBA, a change from his days at Texas A&M.

“College, it kinda waned out a little bit, but there were some conference games on the road at Arkansas, Alabama. Auburn’s worse. There’s some frat boys in the crowd talking shit and you gotta let ’em know, ‘Hey, you’re here to watch me.’

“Once I got to the league, I was like, I’m not gonna make this any harder on myself than I have to. There’s some guys you talk shit to and the wake up. And they’re like, ‘Oh, you want me to try?’ Then they score 10 points in the last five minutes of the quarter, so no, I got away from that.”

Finally, Caruso joked about his weed arrest in a Texas airport. McAfee asks if he hooped up in jail.

“No, I didn’t. I went straight to booking then got the hell out of there. I’m never going back through College Station airport again. My own people let me down.”

Caruso is a funny guy. This interview gave an awesome insight into his basketball and personal life. Definitely worth a listen.