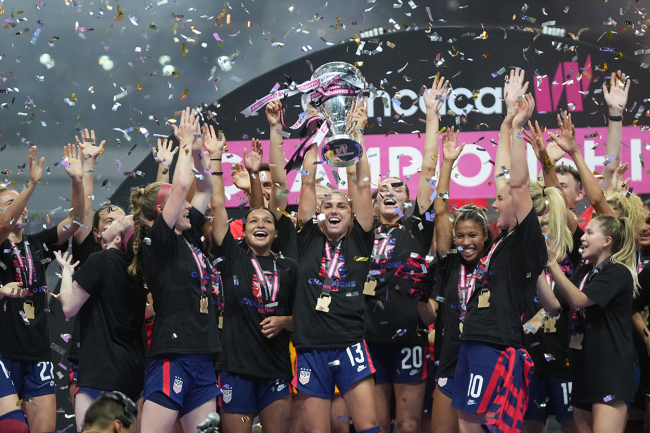 Cameron Smith won The Open Championship with a dominant back-nine on Sunday afternoon. After winning his first Major tournament, the 28-year-old Aussie vowed to drink beers from the Claret Jug, the trophy presented to The Open champion.

Not long after making his promise to party in celebration, Smith found out exactly how many beers fit in the Claret Jug after estimating that it would fit two. He also inspired Alex Morgan in the process.

On Monday night, the U.S. Women’s National Team squared off against Canada in the CONCACAF Final. The United States entered the class ranked No. 1 in the FIFA rankings as the defending World Cup champions, while Canada entered ranked No. 6 as the defending Olympic champions.

Although the U.S. had multiple opportunities to score, they could not find the net through the first 77 minutes. In the 78th, Morgan put her team on the board with a penalty kick to open scoring and take a 1-0 lead.

Morgan’s goal was the only goal as the score held through the final whistle. With the win, the United States not only claimed its title as the best team in North America, but it punched its ticket to the 2024 Olympic Games in Paris.

After the match, it was time to party. Morgan, drawing inspiration from Smith, decided to do a science experiment of her own, kind of.

Smith decided to see how many beers fit in the Claret Jug. Morgan tried to fit as many margaritas as she could in the CONCACAF trophy. It fit about 20.