Alex Smith Is The NFL Comeback Story That Should Terrify Us 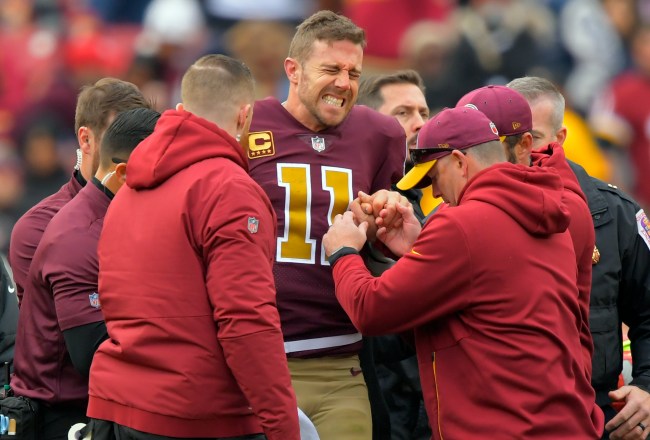 I get it. There’s nothing Americans love more than a good comeback story with a side of saturated fats.

It’s why we all pretended to love bike racing and fluorescent bracelets in the late 90s and why Curt Schilling’s bloody sock sold for nearly $100,000 despite Curt not believing in evolution.

Tales of perseverance against the odds are essential to the betterment of society, but it would reckless and irresponsible to allow Alex Smith to play professional football again after his leg fell off.

We are less than 19 months removed from an injury that made Joe Theismann’s career-ending leg break look like a hangnail and Ron Rivera is out here claiming that the 36-year-old Smith could compete for the starting job in Washington this upcoming season.

To be clear, it is not hyperbolic to claim that Smith’s horrific injury nearly killed him.

It was not just a spiral fracture to his tibia and fibula that required SEVENTEEN surgeries and doctors referred to as ‘warlike.’ Smith’s leg mutated and poisoned his blood, ultimately falling victim to sepsis, a disease that kills 1 in 5 people worldwide.

YOU: “It’s easy for you, a doughy blogger who can’t go up a flight of steps without an inhaler, to tell a man who’s trained his entire life for gridiron glory to give up on his dream.”

I’m no medical professional, but if your leg once looked like a Jackson Pollack painting you probably shouldn’t get behind a porous offensive line with guys like this trying to bury you into the earth’s crust.

According to a totally unreliable site with no knowledge of the intricacies of Alex Smith’s finances, he is worth $55 million. He’s got a beautiful wife and three healthy kids. There’s no reason he cannot do what the majority of uber-rich retired athletes do: gain 20 pounds around the waist, invest in a couple car washes, and ride off drunk into the sunset.

Alex, if you’re not going to do it for me, think of your children.

Happy 2018!! These people make my heart so full❤️ Can’t wait to see what new adventures await this crazy crew. On a separate note.. One of my New Years resolutions should be to print Christmas cards/pictures. These pics were taken in Nov by the talented @theluxestudios with intentions of making Christmas cards. Yeah, I dropped the ball🤷🏼‍♀️ #nextyear #footballseasonoverload #valentinescards?