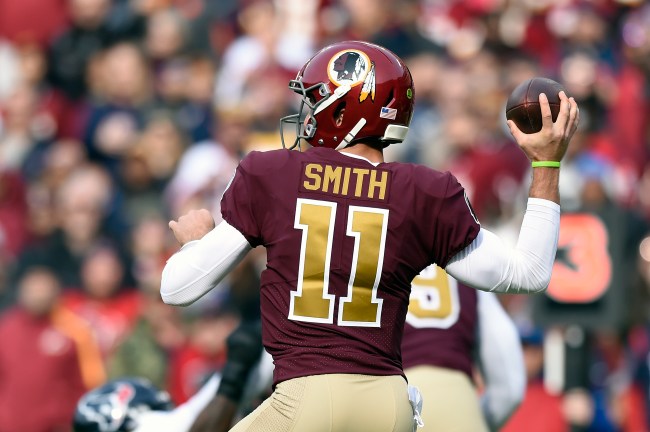 Alex Smith was so preoccupied with whether or not he could, he didn’t stop to think if he should.

We are just 21 months removed from a “warlike” leg injury that quite literally killed Alex Smith. He spent a full year either in the hospital, a wheelchair, or in an external fixator cast that looks like it was constructed in my cousin Randy’s garage. He underwent SEVENTEEN surgeries in nine months and fought off a condition that kills 1 in 5 people worldwide.

And now, the Washington Football team has released Smith from the PUP list and Ron Rivera has claimed the 36-year-old has a chance to start under center this upcoming season. Like in a real life NFL football game.

This should terrify us.

Smith, who on Tuesday will be practicing in full pads, spoke about why he made the near-impossible push to return to one of the most violent sports in existence.

“In the NFL world, I’m an old guy. I’m a dinosaur. But in the bigger aspect of life, I’m 36 years old. I have three little kids. I have the rest of my life in front of me. Selfishly, I’m even doing this for them, as crazy as that sounds. I know if I can go out there and play quarterback, I can do anything else in life.”

“I’m so grateful to have the opportunity to put that jersey on the last two days and go out there and try to do it,” Smith continued. “For me it’s taking on that challenge. I don’t think it’s something that I can walk away from and be able to sleep at night. If I did, I don’t think I could look my kids in the eye and talk to them about giving it their all and pushing through things. We all face adversity in life. It comes in different forms. Was I going to talk about it or be about it?”

Just for a bit of context here, this was Smith’s Jackson Pollack-looking leg four days after his injury.

“However this comes out, I’m going to be better off for it,” Smith said. “I continue to make gains. I continue to get better, even in these last few weeks. That continues to excite me, that I can keep pushing on. At some point I’ll find out what my limitations are, but I haven’t found them yet.”

Like all Americans, I’m a sucker for a good comeback story, but this may be where I draw the line.