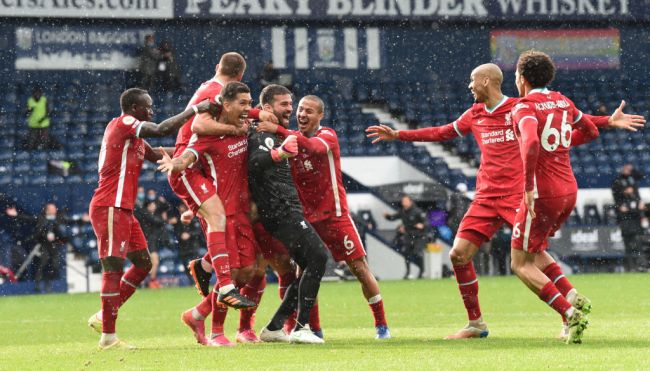 Liverpool Football Club — needing three wins in their final three games to qualify for next season’s Champions League — saved their season from the brink of disaster with a truly remarkable game-winning header from Brazilain goalkeeper Alisson Becker in the match’s final seconds. The goal also represents the first-ever headed goal scored by a goalkeeper in the history of the Premier League AND the first-ever game winning goal scored by a keeper.

The goal is even more remarkable when considering the context of Alisson’s season. Widely considered to be one of the world’s best goalkeepers in the world, the 28-year-old Brazilian has struggled with mental lapses this season. Alisson’s personal life has also been worried, as his father tragically drowned back in February, just a couple of months before the birth of his new son.

Alisson’s postgame interview was equally remarkable, as the keeper — one of the most prominent religious players in the Premier League — spoke about the goal and what it means to him, especially considering the struggles he’s been through this season.

“I have played football since I remember as a human being with my father. I hope he was here to see it. I am sure he is celebrating,” Alisson said.

“I’m too emotional, with these last few months, and everything that has happened to me and my family. I just wish my father was here to see it.”

A fantastic interview with Alisson, who dedicates his sensational last-minute goal to his father who passed away earlier this year 🙌 pic.twitter.com/4w2HsbaO16

Liverpool now heads into their final two Premier League games of the season against Burnley and Crystal Palace needing to win both in order to finish in the Top Four and qualify for next season’s Champions League. Considering the raft of injuries the club has sustained this season, particularly in the center back department, finishing in the Top Four would be considered a huge success for the defending Premier League Champions, who also won the Champions League back in 2019.