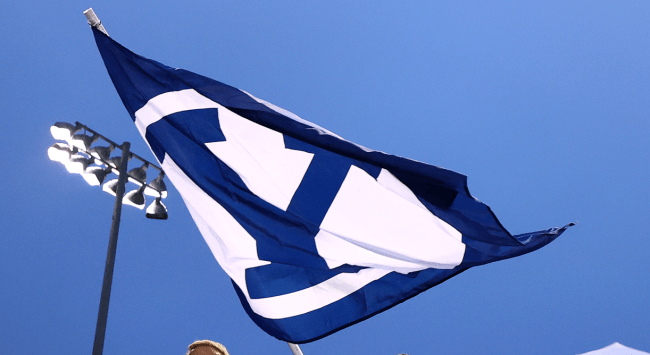 Last month, Duke volleyball player Rachel Richardson came forward with claims that she repeatedly heard a racial slur directed at her coming from someone sitting in Brigham Young University’s student section during a match.

Richardson’s godmother Lesa Pamplin corrobrated Rachel’s claims, saying she too heard it “every time she served.”

On Sept. 9, BYU issued a statement that read, “From our extensive review, we have not found any evidence to corroborate the allegation that fans engaged in racial heckling or uttered racial slurs at the event. As we stated earlier, we would not tolerate any conduct that would make a student-athlete feel unsafe. That is the reason for our immediate response and our thorough investigation.

“As a result of our investigation, we have lifted the ban on the fan who was identified as having uttered racial slurs during the match. We have not found any evidence that that individual engaged in such an activity. BYU sincerely apologizes to that fan for any hardship the ban has caused.”

The statement continued, “There will be some who assume we are being selective in our review. To the contrary, we have tried to be as thorough as possible in our investigation, and we renew our invitation for anyone with evidence contrary to our findings to come forward and share it. Despite being unable to find supporting evidence of racial slurs in the many recordings and interviews, we hope that all those involved will understand our sincere efforts to ensure that all student-athletes competing at BYU feel safe.”

As a result of the alleged incident, South Carolina women’s basketball coach Dawn Staley canceled a home-and-home series against BYU. She stood by her decision despite BYU’s investigation, saying, “After my personal research, I made a decision for the well-being of my team.”

On Friday, the Guardian published a new report with more allegations of racist slurs being used at a BYU athletic event.

Five women’s soccer players from a visiting team told the Guardian they heard the N-word being directed at them and their teammates from the crowd during a game at BYU in 2021. Players had knelt for the national anthem to protest racial and social injustice when they say they heard shouts from the crowd.

“I just remember that there was like a consistent chant of ‘stand up, N-words’ during the anthem and right after,” one of the players told the Guardian. “And when brought to the attention of the BYU coaching staff there was no real response or sense of, like, alarm.”

She added: “I felt disappointed but not surprised. Backlash for kneeling was not new for our group but to hear that in person was shocking. I think both the fans and coaching staff knew we wouldn’t cancel the game after the incident, which once again shows this could be part of a bigger cultural issue within BYU as an institution.”

Four of her teammates independently confirmed to the Guardian that they also heard the chants.

“Your inquiry is the first time we are hearing this specific concern,” Jon McBride, BYU’s associate athletic director for communications and media strategy, informed the Guardian when asked to comment.

Ironically, BYU players and fans were recently the target of an offensive chant during their football game against the University of Oregon.

That ugly display probably cost the Ducks a chance at signing a quarterback they were pursuing for their 2024 recruiting class.