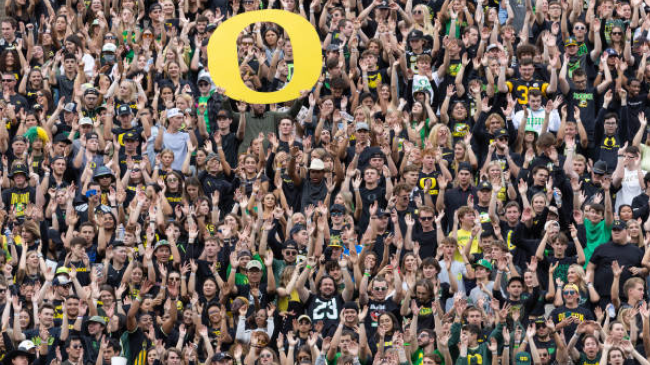 This weekend, Oregon’s fans probably cost their team a shot at a quarterback they were pursuing for their 2024 recruiting class.

Ducks fans made headlines this weekend for stupidly chanting “F*** the Mormons” during Saturday’s win over BYU. While that’s bad enough by itself, the timing of the chant made it even stupider.

TC Manumaleuna II was in attendance at this weekend’s game. The quarterback is from Oregon, playing his high school in Salem, and has been recruited by both Oregon and BYU, with Oregon having made him an offer more than 2 years ago. He also happens to be a member of the Mormon community.

The chants from the Oregon Ducks fans led to Manumaleuna leaving the game at halftime. He was asked about the incident afterwards and said that while he isn’t entirely crossing the Ducks off his list, the chant did have an impact on him.

Oregon's students chanted 'F*** The Mormons"…while an LDS recruit considering the Ducks was at the game. Big surprise! He left at halftime.

This comes a year after USC's student section did the same thing…when THEIR QB was LDS: https://t.co/eYe6ll1SK8 pic.twitter.com/uJuOtF33u6

Oregon has since put out a statement condemning the chant from their fans.

These types of actions go against everything the university stands for, and it goes against the spirit of competition. We can and will do better as a campus community that has no place for hate, bias or bigotry.

It seems that Ducks fans have are going to get a dose of instant karma for this chant as they appear to have really hurt their team’s chances of landing a quarterback that had already drawn plenty of interest before his junior year in high school.