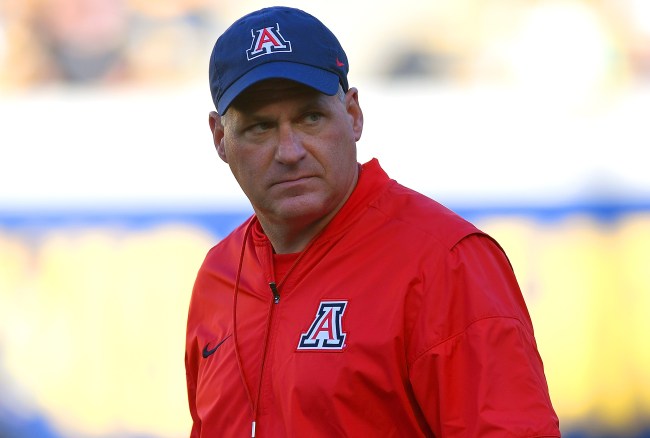 Wilhelmsen filed a $7.5 million notice of claim with the Arizona Attorney General’s Office accusing the 54-year-old Rodriguez of making unwanted sexual advances towards her, grabbing his penis in the middle of a conversation with her, and coercing her to lie on his behalf to uphold his reputation.

According to Sporting News, Wilhelmsen also claims that Rodriguez authored a “Hideaway Book” which was only to be distributed to members of the “Triangle of Secrecy”–consisting of Melissa, former special teams coach Charlie Ragle and director of junior college relations Miguel Reveles.

The book was created to establish complete control over his operation and protect his prestige under the most inappropriate of circumstances. The book reportedly even contained the saying, ““Title IX doesn’t exist in our office.”

Rodriguez’s reckless autonomy can be described best by an incident that allegedly occurred back in November 2015 in which Melissa was tasked with lying to Rodriguez’s wife about his extramarital affairs.

On November 6, 2015, Rodriguez asked Melissa to get a sideline pass for his “friend” for the USC game in Tucson, which turned out to be his girlfriend. During the game, Melissa realized that Rodriguez’s wife was also on the sideline. At some point Melissa had to stand between the two hoping to avoid a confrontation. The following Monday, Melissa complained to Rodriguez about how upsetting it was to be placed in that situation. Rodriguez laughed it off without acknowledging her stress or sense of betrayal to his wife.

Rodriguez’s wife reportedly grilled Wilhelmsen for three hours about his fidelity during a lunch in May 2016.

Oh, and the allegations don’t just stop at sexual misconduct and infidelity. Wilhelmsen also claims Rodriguez did nothing to help prevent the death of one of his players, Zach Hemmila, in 2016. Via Sporting News:

“The evening before, Matt Dudek had taken Zach to Rodriguez, telling him that something was wrong with Zach and needed help. But Rodriguez did nothing, simply saying “he’ll be fine.” Rodriguez’s knowledge of the extent of Zach’s issues was another secret Melissa had to keep.”

Soon thereafter, it was found that Zach died due to a fatal concoction of pain killers and anxiety medication.

With more and more people of high stature being exposed for lewd conduct, the question becomes more and more necessary: are these people inherently shitty or did power turn them into neanderthals? I can’t imagine a scenario in which I grab my hog in front of a co-worker, but if I was given a few million dollars and a public persona, would I be a dick grabber? Scary food for thought.