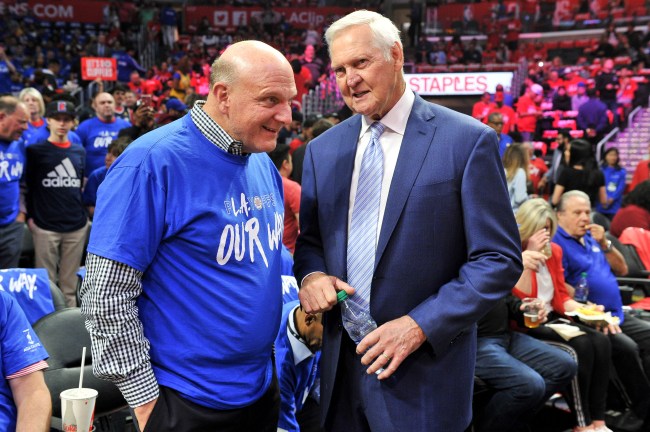 The NBA is currently investigating claims that Los Angeles Clippers executive Jerry West offered to pay Kawhi Leonard’s friend, Johnny Wilkes, to help get the superstar to sign with the team in 2019.

TMZ reported that Wilkes is suing West for not making a $2.5 million payment that he was promised in exchange for his help in landing Kawhi. The Clippers went on to deny the claims and called Wilkes’ allegations “false.”

More from the Clippers' statement:

"(The Clippers) are providing the NBA with evidence that the allegations are false.”

Wilkes is apparently now providing evidence to prove that he had a relationship with West and leaked an audio recording of the Clippers exec bashing the Lakers while inviting Kawhi’s supposed confidante out to dinner to discuss things.

TMZ Sports has obtained the voicemail — in which a man who sounds like West says, “Hey there, this is Jerry calling. I really want to thank you a lot for trying to help. I heard this morning that everyone over in the Lakers camp thinks they’re gonna get him.”

“I just find it hard to believe that he would want to go to that sh*t show where he would not even be … wouldn’t even get his name in the paper and he wouldn’t be the face of the franchise that’s for sure.”

“He might be the best player on the team, but hope things are well and again, I really really appreciate everything you’ve done.”

The voicemail continues … “I will keep you apprised of what’s going on. But, I do want to get together with you privately and would love to take you to dinner and even Sam if he’s around. So I can at least pay my respects to you guys for being so generous and helpful. Take care, talk to you sometime soon. Bye-bye.”

Lakers fans weren’t happy with West’s comments about their team.

Jerry West, the logo, spent his entire career with the Lakers, won a championship, MVP, etc during that time. Spent his formidable front office years with the team too, and now he’s caught doing this? Jokes on Jerry. The Lakers won the title a year later…#NBATwitter #Lakers https://t.co/GWVDcsE8H4

Take his jersey down @Lakers https://t.co/hW6nTovSCO