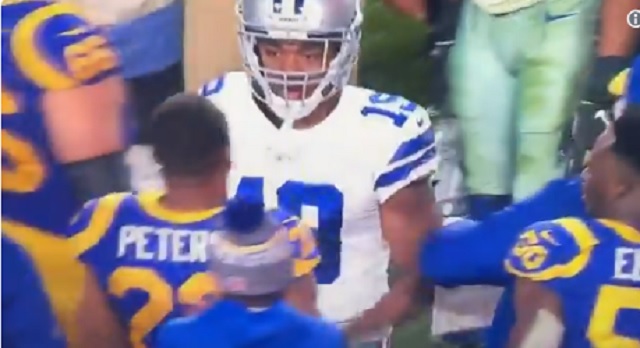 Amari Cooper and Marcus Peters do not like each other and got into it several times during today’s Cowboys-Rams divisional playoff game.

Marcus Peters and Amari Cooper going at it pic.twitter.com/WaTRVSvtQK

After the game Peters and Cooper went at it again one the sideline as teammates were forced to break up a potential fight between the two.

Marcus Peters and Amari Cooper were still going at it after the game.pic.twitter.com/72UeNgXFWG

F the cowboys but Peters is trash and got abused all game. Wish cooper would gak him

This is the difference between someone like him and Ramsey. Jalen Ramsey can say his shit and back it up. Marcus Peters couldn’t even cover Brady

Marcus Peter blew coverage on almost every play, their offense kept them in the game for sure