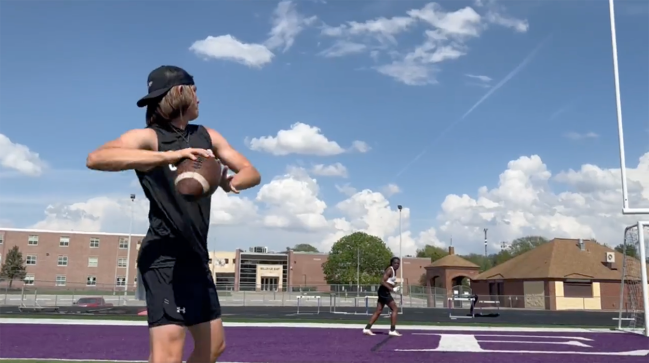 Mikey Gow is the most interesting high school quarterback in the Class of 2025. There is still a long way to go in his recruitment, but he has already drawn interest from multiple Power Five schools and recently left Lamar Jackson impressed.

As a 14-year-old freshman, Gow earned the starting job last season and although his team was not very good, he turned quite a few heads. As a result of his play, he already has interest from Cincinnati, Kansas State, Iowa, Michigan, Notre Dame, Oklahoma State, Texas and Ole Miss, among others.

And he has already inked his first NIL deal.

Excited to announce my first NIL deal with SOLDIER SPORTS. I chose SOLDIER because I believe it's the next Under Armour@soldiersports pic.twitter.com/q3ksQaxP0G

Gow will also only continue to get stronger as he grows.

Working on my distance. 40 yards standing still and 50 with a hitch pic.twitter.com/RMalS9luiJ

And he has some quick feet!

Obviously, Gow’s skillset is very unique. If a defense is to flush him out of the picket to his left, he can throw downfield with his left arm. If he is flushed right, he can throw with his right arm— which is his stronger and more accurate arm.

While football fans continue to freak out about Patrick Mahomes’ arm angle and ability to make ridiculous throws all over the field, Gow’s ambidextrousness could elevate that even further. He could roll to either side, flip his hips, and use his opposite arm to throw the ball rather than having to throw across his body.