An Emotional T.J. Oshie Wipes Away Tears After Scoring Hat Trick In His First Game Since Father’s Death 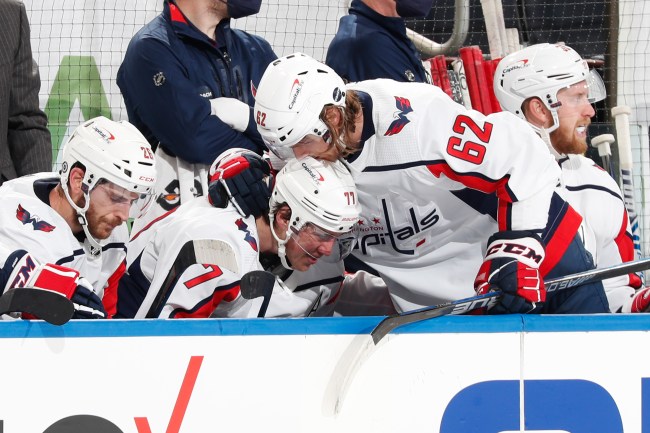 While the Capitals made headlines on Wednesday over their brawl with the Rangers another storyline involving T.J. Oshie was being overshadowed by all the chaos.

On Monday, Oshie announced that his father had passed away in a touching post on social media.

It’s with a heavy heart today that my family mourns the passing of my Dad “Coach Oshie.” Coach lived life to the fullest and was unanimously loved by everyone who met him. Thanks to all the family and friends for their support. Heaven received a legend today. #RIPCoachOsh pic.twitter.com/WSAgNNtTpO

During the Caps game against the Rangers on Wednesday, Oshie was able to score a hat trick in his first game after his father’s death.

T.J. Oshie scored a hat-trick in his first game back since the death of his father 🙏

After scoring the hat trick an emotional Oshie could be seen wiping away tears on the bench while being consoled by his teammates.

An emotional TJ Oshie on the bench after scoring a hat trick in his first game since his father's passing pic.twitter.com/zGRfGF2YPP