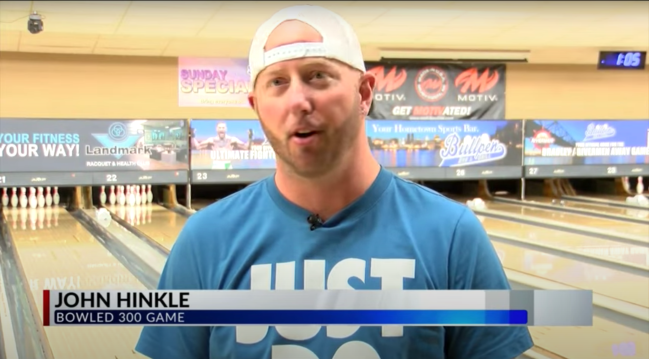 Most people can’t even begin to fathom bowling a 300 game, but John Hinkle has bowled so many that he can’t keep track. The Peoria, Illinois-native won two NCAA bowling national championships at Western Illinois and doesn’t mess around when it comes to the ten-pin sport. However, his most recent perfect game meant the most. WMBD/CBS shared the story.

It all started Hinkle’s father introduced John and his brother Joe to bowling at a very young age. The family bowled together throughout the years and it was always a special thing for them, so when the elder Hinkle passed away in 2016, John said that he wanted to find a way to get his father’s ashes placed into a bowling ball.

That wish came true recently. You see, Hinkle bowls with two hands. To do so legally, a bowler cannot have three finger holes in his or her ball and Hinkle decided to pay homage to his late father by filling the thumb hole with his ashes.

Sure enough, John showed up to his league night at Landmark Lanes on April 12th and did just that. He bowled perfect 300 with his father’s ashes in the ball. 12 strikes in a row.

“I had tears in my eyes in the 11th and 12th frames. I couldn’t tell you where that last ball went, I had so many tears just throwing it,” Hinkle said. “He was there. This is the best (300 game), and definitely the hardest. I was shaking.”

Apparently, his father had scored a 298 and 299, but never crossed over into perfect game territory. Now he has, vicariously alongside his son. Aren’t sports the best?