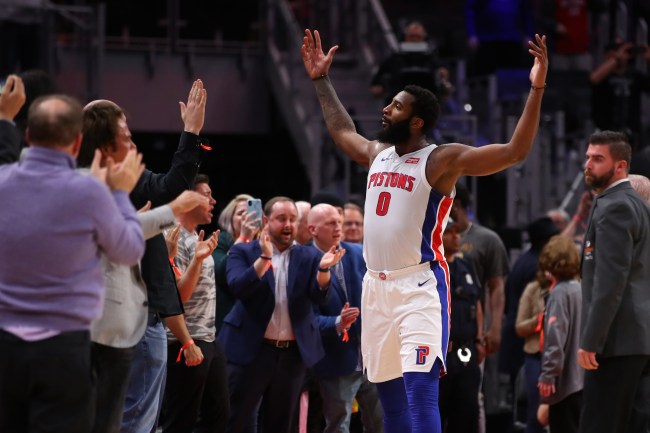 After overcoming a 19-point halftime deficit on Tuesday night to beat the Memphis Grizzlies 100-93 and breaking a four-game skid, the Detroit Pistons are one win away from punching their ticket to just their second playoff appearance in a decade.

Detroit improved their record to 40-41 on the season and now must beat the New York Knicks on Wednesday night to control their own destiny. If they lose, they’ll have to rely on the Orlando Magic to beat the Charlotte Hornets to squeak into the playoffs.

After the win, Pistons center and two-time All-Star Andre Drummond sent a tweet aimed at distracting everyone from the fact that they beat a dogshit Grizzlies team that committed 22 turnovers and were without Avery Bradley, Mike Conley, and most importantly, Joakim Noah.

ARE YOU NOT ENTERTAINED????

Hell of a comeback fellas! One more pic.twitter.com/dmdSXWvukn

A frustrated Pistons fans wasn’t impressed with his team failing to clinch a playoff spot earlier and clinging to playoff hopes, and decided to trigger Drummond into a Twitter disagreement.

No team is trash in the NBA sir,you couldn’t walk a day in one of our shoes from the best teams to the teams rebuilding.We work our ass off every single night. may not be to your liking because you don’t know what it’s like being out there.But don’t discredit my team or any team

Most trolls just want to be acknowledged, then they’ll change their tune. Not Mr. Kesto.

Andrea response to me had no substance, it was basically “stop making fun of me”😂😂💀💀 pic.twitter.com/v29KPi2LSk