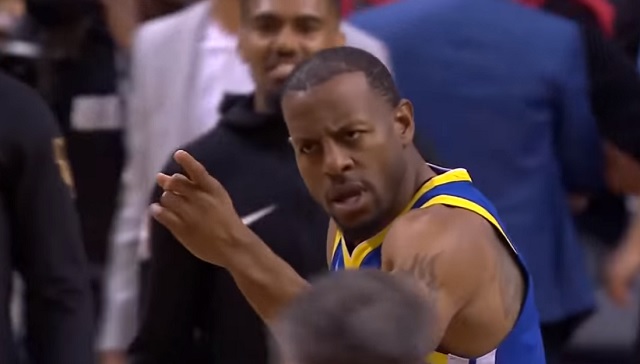 The Golden State Warriors are in the middle of a controversy surrounding Kevin Durant’s injured Achilles where their star player endured pressure not only by teammates but by fans and the media to come back and play in the finals.

Durant is reportedly “really pissed at the Warriors” with how they handled the entire injury situation during the finals.

Questions that linger over whether the strained calf led to the Achilles injury, and if the Golden State Warriors made him aware of that possibility, remain unanswered. But the indication from several league sources is that Durant is not happy with the team, and the presumption is that it stems from whatever role Warriors officials played in his decision to suit up. Coach Steve Kerr says he was told Durant could not further injure himself by playing, which obviously proved not to be true. If Durant was told the same, it would give credence to the notion that, as one league executive claims, “He’s really pissed off at the Warriors.”

Today, Warriors veteran guard Andre Iguodala went on the Breakfast Club radio show and revealed that he also felt the pressure to come back to play during the playoffs last year after team doctors lied to the media and downplayed his injury to the public.

Everyone is feeding stuff in our heads. Last year it happened to me. I missed last three games in the Houston series that went to game 7 and we barely got out of the series and guys were looking at me like when are you coming back? And I had a fractured leg and it’s being put out there like I got a bone bruise and it was fractured, SO I’m fighting with the team and I’m fighting with media and my teammates asked me every day, how you feeling? Like K(Durant) he was getting from everybody too asking him how you feeling?

Before the start of the season, Iguodala spoke with Mark Medina of the Mercury News and issued similar complaints about the Warriors lying about his injury led to pressure from teammates and family to come back sooner than he wanted to.

“I was really upset because I was in a good rhythm before I got hurt [in Game 3 of the Western Conference Finals against the Houston Rockets]. The injury kind of bothered me because there was a lot going on behind closed doors that was bothering me. I hadn’t missed a playoff game my entire career. It isn’t about waiting around. I know what it was. A lot of people knew what it was. But I just went along with it. Whatever you say it is, a bruise or whatever, [they say] I should be back day-to-day. But I know it wasn’t day-to-day. All right cool. Players can fold under that type of scrutiny. Basketball is the No. 2 sport in the world and No. 2 in America. We’re trending forward each and every year. A lot of eyes are there. You got family members asking you, ‘What’s wrong?’ and ‘When are you coming back?’

If I can’t talk to ya’ll, I’m isolated. That can do some damage to players. I’ve seen it first hand. Guys fold and don’t attempt to come back. But I tried to keep the right mindset. I had the ‘whatever’ mentality where I don’t really care. I’m not arrogant, but those are the moments you have to be arrogant. Instead of trying to defend yourself, say, ‘Listen man, I’m smarter than all of ya’ll. There’s nothing you can tell me I don’t already know.’ I took that approach. I was working overtime trying to get back. I was shooting without jumping to get some type of rhythm in the ball every day. Then when I came back, I was hurting in Game 3 pretty badly. If you look back at the Finals, Shaun [Livingston] was like, ‘Bro, what are you doing?’ I said, ‘Bro, I can’t run!’ He said, ‘I know! What the [heck] are you doing?’ I was like, ‘I just have to make it happen. Whatever.’

What was going on behind closed doors?

“I don’t want to throw anybody under the bus. Everybody has the same goal at the end of the day. That’s the thing that kills me sometimes – who’s to blame? It’s always like, ‘You have to blame somebody.’”

How about more of what was the severity of the injury?

“At the end of the day, everybody wants to win. Everybody wants to play. I want to play. I was like, ‘Whatever.’ That’s when you get in trouble. I’ve been in organizations where it’s a blame game. Then you think, ‘I’m just playing so it’s not my fault.’ I have to make the right decision so it’s not my fault. That’s from the front office, coaching staff, players, everybody. It’s not this organization. But I’ve been in that situation many times. So I know that path it can lead to. Whatever…

I had a spider fracture. It was like a spider web with cracks. It depends on whose eyes were looking at it. If you wrote that, someone could say, ‘No it wasn’t.’ But the person who said it was, said it was that. It’s one of those things.”

This is not a good look for the Warriors organization.