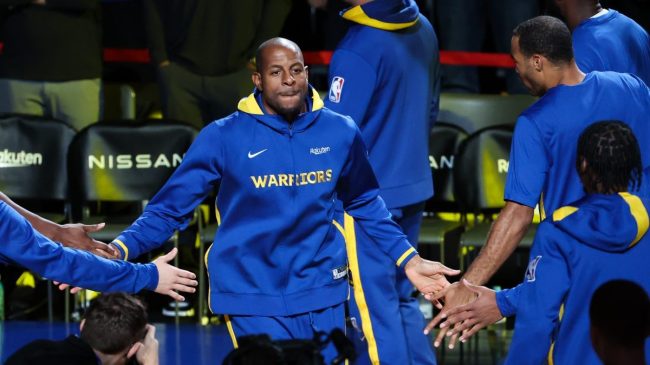 Golden State Warriors forward Andre Iguodala has just about seen it all in his 18-year NBA career. Iguodala is a former NBA All-Star. He’s a four-time NBA champ, a two-time NBA All-Defense selection and widely regarded as one of the league’s best role players of all time.

It appears that Iguodala sees something particularly special in Warriors’ teammate Donte DiVincenzo. DiVincenzo was a first-round pick by the Milwaukee Bucks in the 2018 NBA Draft. After 3.5 solid seasons as a rotation player in Milwaukee, DiVincenzo was traded to the Sacramento Kings in a move that brought Serge Ibaka to Milwaukee.

His Sacramento tenure was short-lived. DiVincenzo played just 25 games for the Kings before signing a two-year, $9.3 million deal with Golden State in the offseason.

While he’s yet to play a regular-season game for the Warriors, DiVincenzo appears to have already impressed the veteran Iguodala.

Iguodala is entering his final season in the NBA and isn’t holding back when it comes to sharing his thoughts. Marcus Thompson of The Athletic recently shared one quote, in particular, that raised some eyebrows.

Andre Iguodala’s message to Donte DiVincenzo: ‘You’re one of the white guys that actually belong at a high level’ https://t.co/8h9XlOKxom

Iguodala’s quote was undoubtedly meant as high praise for the young combo guard out of Villanova. But not everyone seemed to see it that way.

I hope this isn’t laughed at and blown over

If brady said this to Lamar Jackson goodness gracious

Thankfully for Iguodala, the quote seems to have largely flown under the radar. He can thank teammate Draymond Green for that.

The Warriors begin their NBA title defense on Oct. 18 when they welcome the Los Angeles Lakers to the Chase Center.