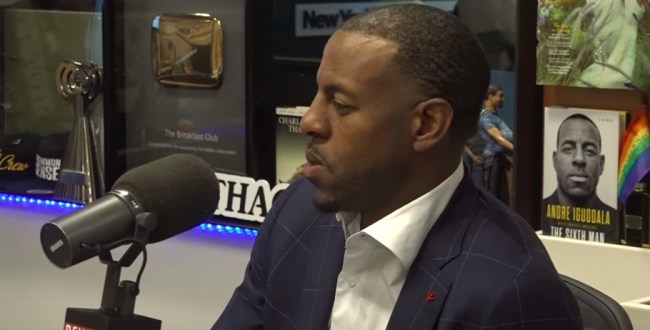 Andre Iguodola made an appearance on “The Breakfast Club” Tuesday to discuss his new book The Sixth Man and offered up some juicy stories from his 15-year NBA career.

The three-time NBA champion revealed that his leg injury during the 2018 NBA playoffs was actually a fracture that the team knowingly labeled a bone bruise. He also believes that former Warriors head coach Mark Jackson is being “blackballed” from the NBA due to behind-the-scenes “politics.” Oh, and then he took a shot at fair weather Warriors fans by claiming that the team’s success “priced our real fans out” who are unable to pay the astronomical price for seats.

But, by far the most disturbing part of the conversation occurred when the 35-year-old revealed that it’s not only accepted, but common, for NBA players to rush to their phones to check out social media chatter at HALFTIME.

Also normal to check their stats because their agents are telling them they need to average a certain amount of points.

I really hate being that “in my day!” guy, but imagine a player doing what Amir Johnson and Joel Embiid did late in the fourth quarter of a PLAYOFF loss on a team helmed by Kobe, Shaq, or Jordan. They’d be deceased at the time of this writing.

I’ve seen the negative impact social media can have, particularly on younger players, who grew up with Twitter and Instagram as an integral part of life.

A player checking Twitter at halftime? I’ve seen it.

A player tweeting out a grievance with an organization about playing time or how he is being utilized? I see it far too often.

But the most concerning? Watching a really talented player corrupt his mind and confidence by reading all the critiques from anonymous football experts around the world. Negative social media can ruin a player. Reading your mentions? It’s poison.

I guess I can’t hate on players’ in-game obsession with social media because it birthed one of the greatest meme formats in history.