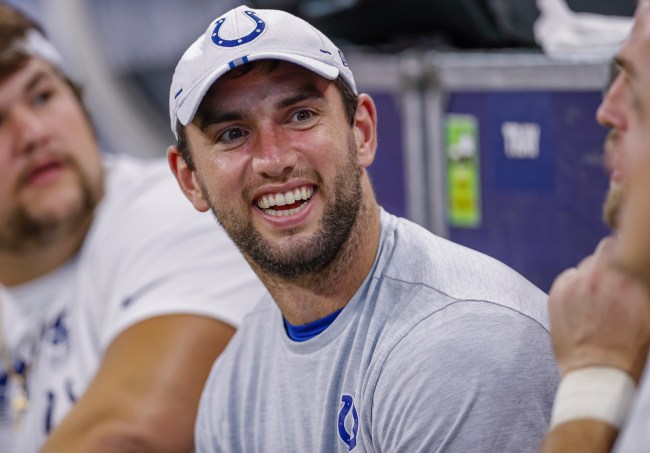 Andrew Luck has always had the “aw shucks” look to him, hasn’t he? I’m not saying he’s Gomer Pyle or anything, but the now former Indianapolis Colts quarterback never actually seemed like he was a professional athlete. He’s a little awkward. He seemed a little overwhelmed with the attention. He was just the guy next door. Maybe that persona is why so many Colts fans are pissed off at the former No. 1 overall pick’s decision to abruptly retire from the NFL, because he seemed like one of them.

As the entire league still recovers from the shocking news of Andrew Luck’s retirement, more and more people are showing their support for the four-time Pro Bowler. Whether it’s current or former players applauding him for making such a bold decision, or fans wondering if Luck will ever get the itch to return to football again, one story that came out was from a former showrunner for NBC’s Parks and Recreation, Mike Schur, who saw firsthand how Luck’s two cameos on the show impacted the cast and crew in a positive way.

Here’s a look at one of the appearances by Luck on Parks and Recreation.

Taking to Twitter, here’s what Schur had to detail about Andrew Luck, talking about how the former quarterback laughed it up with actors and crew, as well as showing Chris Pratt how to properly throw a football. Take a look below, because it’s pretty awesome stuff.

When we were making Parks and Recreation we shot scenes with the Colts. We were told we had maybe an hour with the players. Then Andrew Luck showed up, and he was an absolute delight. Warm, funny, generous. He threw TD passes to anyone who wanted one, just to make us happy. 1/

He made fifty fans that day. If the game isn’t bringing that guy joy anymore, it’s the game’s fault, not his. I love that he has the courage and integrity to walk away from this insane sport, and wish him nothing but health and happiness from whatever he does next. 3/3

It’s clear that Andrew Luck’s real personality came out while filming Parks and Rec, with the quarterback opening up for the entire cast and crew. And, while some may say this is how most people would act, we all know that few athletes would take that kind of time in their busy schedules to just hangout outside of their responsibilities.

For those questioning Andrew Luck’s decision to retire, just take a look at the video below and ask yourself if that’s the type of guy who wanted to walk away. Simply put, his mind and body couldn’t do it anymore, and the guy has a lot of support from people for making the decision he did; even if it’s hard to understand for some.

This is the Andrew Luck that Colts fans booed pic.twitter.com/ZAdgS2RdWb

Here’s to whatever comes next for Luck, because the guy has the world at his fingertips, it’s just a matter of him figuring out what it is he wants to do now.