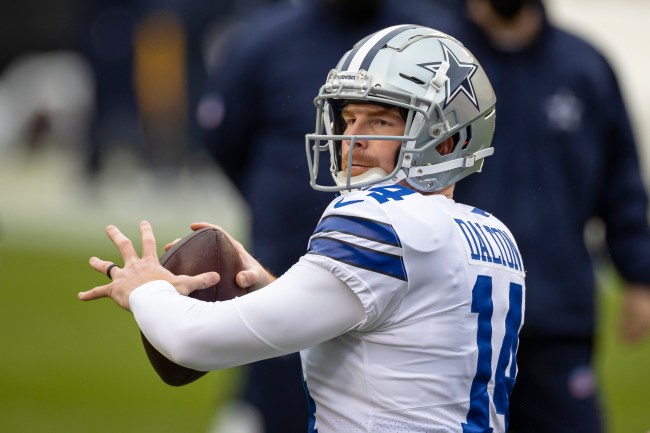 It has been a tough season for Andy Dalton. The 33-year-old quarterback signed with Dallas on a one-year deal in May and was expected to provide the Cowboys a security blanket under center behind Dak Prescott on the depth chart. That theory was quickly tested in Week 5 when Prescott went down with a season-ending leg injury. Dalton stepped in behind an injury-depleted, struggling offensive line and had to dance for his life in the backfield in two consecutive losses.

During his second start against Washington, he took a brutal shot to the head on a late hit by Washington Football Team linebacker Jon Bostic.

Andy Dalton took a nasty hit to the head pic.twitter.com/Yg913OGotr

Dalton stayed down on the turf for awhile and was diagnosed with a major concussion after he was carted off the field. On Thursday, he told reporters that he experienced severe headaches after the incident and suffered memory loss. Less than 10 days later, while still recovering from the head injury, Dalton tested positive Coronavirus and was placed on the Injured Reserve/COVID-19 list. He told reporters that he felt like he was getting over the headaches from his concussion when the virus “hit him hard” on the first day and brought him a different type of headache.

The former Texas Christian Horned Frog and Cincinnati Bengal is not sure how he contracted the virus, but said that his wife and one of his three sons also tested positive. He has since cleared both COVID-19 and concussion protocol and will return to the lineup for the Cowboys’ matchup with the Vikings on Sunday, but revealed that he has not regained his sense of smell or taste.

Dallas is still mathematically in the mix to win the NFC East, despite its 2-7 record and Dalton will try to gain ground in the division starting this weekend.