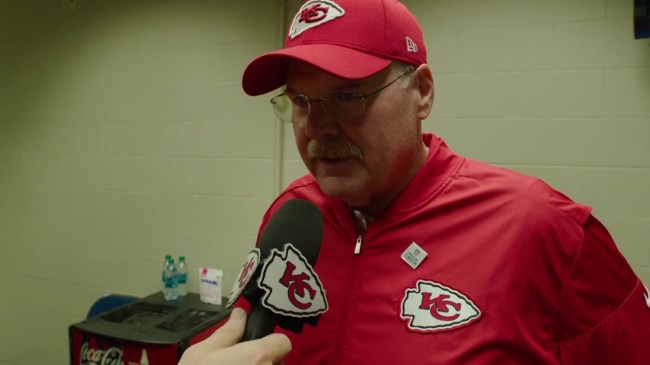 Andy Reid tragically lost his son Garrett in 2012 to a heroin overdose, which brought the entire NFL community to aid the current Kansas City Chiefs’ head coach in any way possible. Unfortunately, that devastating incident is finding its way back into the news today because of an idiotic comparison from a Kansas City radio host named Kevin Kietzman.

While on his radio show, Kietzman crossed a major line by talking about Andy Reid’s family situation while trying to make a point about football. It failed in a big way, and the reactions are (rightfully) triggered, with a lot of people on social media weighing in on the comments.

Giving his thoughts on Andy Reid and his inability to discipline players, Kevin Kietzman tried to link Garret’s death to the current situation going on with Chiefs player Tyreek Hill; who is still under investigation for domestic violence. Here’s what the host had to say.

Kevin Kietzman from sports radio 810 just said this. What are your thoughts on this, #ChiefsKingdom pic.twitter.com/SvNMwKRd1l

After the comments about Andy Reid’s character as a father, social media was ready to give their thoughts on the comparisons Kietzman said, with plenty of people hoping the radio host gets fired for attacking Reid in a way that was more than inappropriate. Take a look at some of the Twitter replies below.

Whoever this clown is that said this, you are trash for referencing Andy Reid and his family and his son. You don’t “fix” people dumb ass. To speak about another man’s child is out of bounds. Embarrassing what people will do to try and be relevant. https://t.co/MW9QMveDbN

Thoughts? How about good luck finding another job in broadcasting? Disgrace to humanity!

He is utterly clueless as to the nature of drug addiction, for one. He's basically blaming Andy Reid for the death of his kid. I hope it never strikes his family, that's for sure – then he'll discover how powerless loved ones are over it all. What a horrible, insensitive take.

Get this guy off the radio. He knew exactly what he was saying. Absolutely discussing

You can say anything you want on your last day of work.

My word this is horrendous.

This is what’s wrong with today’s “media”. People can get a podcast or radio show and say whatever they want with no repercussions. Not only should he be fired but should be sued for defamation of character.

Criticize his coaching but leave his family out of it. Bad take. Even worse form.

As most of the people on Twitter pointed out, Kietzman’s take on Andy Reid are way out of bounds. And, while there’s sure to be discipline coming his way for overstepping boundaries, we’ll have to see if he ends up getting fired or just suspended; because he does need to have some punishment.

That said, the radio host did try to clarify his comments in an email to Awful Announcing, saying that he never meant to reference Garrett’s death, but just the overall issues Andy Reid’s sons had. He did add that he thought the the topic was fair because both sons worked for their dad’s team at one point; which, personally speaking, is debatable.

I appreciate you at least putting so much of my quote in your story but still believe you may have missed much of the context.

I was commenting the Chiefs, as they always do, seem to think they can fix players. The owner was criticized, management criticized and Andy Reid was criticized. They asked our city to trust them with these players after we have already witnessed abuse cases and a murder/suicide in the parking lot of the practice facility. Many national outlets have chronicled the Chiefs embarrassing record with players committing crimes against others.

I never once mentioned anything about Andy Reid’s son’s death and never once had it on my mind. A caller called in later and said something about the death and I quickly corrected him and pointed out that I was referencing two sons that were convicted drug dealers and drug addicts that he chose to try to fix by hiring them to work for his football teams.

When Reid decided to hire his sons to try to help them, it ceased being a personal, private matter in my opinion. When a tax payer supported football team hires convicted felons, it is absolutely worthy of scrutiny. Andy Reid has hired several convicted criminals in his career and asked fans to trust him. Some have worked out, many have not. He’s also taken chances on players that somehow drop in the draft because other teams are scared to draft them and he’s going to work it all out. Failure with Marcus Peters and Kareem Hunt. Failed with many lesser known players that had to go. This is a complicated issue in Kansas City and at no point did I ever mention his son’s death, let alone blame him for it. That’s an insane position. But I do believe he and the Chiefs have a bad pattern of employing players, coaches and staff with real issues thinking it will all work out if they are working or playing for him. And that pattern is about to continue when they keep Tyreek Hill.

Reid and the Chiefs asked us to trust them as they moved Hill and subsequently his girlfriend to KC. Now Kansas taxpayers are taking care of Tyreek HIll’s son and likely his soon to be born twins. As concerned citizens, we at least find some comfort knowing our city and excellent Child Services professionals are taking care of a child the Chiefs and Tyreek Hill have failed.

It sure doesn’t sound as if Kevin Kietzman’s backing down from his initial take, which is pretty sad to see. He may have a point about what he said, but it sounds more like damage control after the fact, so here’s to hoping he gets some discipline and learns from this, because Andy Reid and his family deserve better.