Andy Ruiz Jr. Talked About Becoming The First Mexican Heavyweight Champ Of The World And How He Pulled It Off 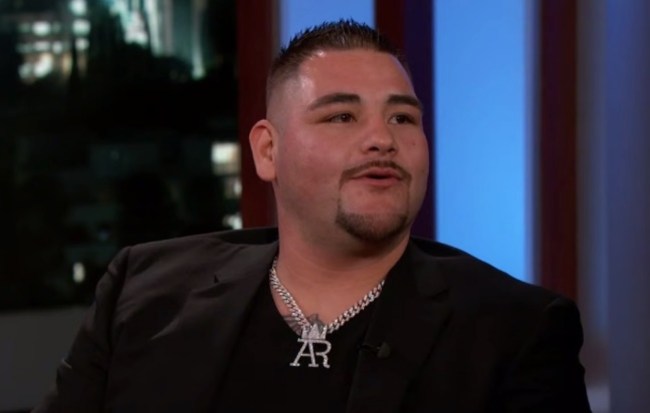 Andy Ruiz Jr. is living LARGE this week, both literally and metaphorically. He just beat Anthony Joshua to become the first ever Mexican Heavyweight Champion of the World and he saw the biggest payday of his career. There’s also A LOT more money on the horizon.

I cannot even begin to wrap my mind around the media whirlwind that Andy Ruiz Jr. is experiencing right now. He went from an 11-to-1 underdog that almost everyone wrote off as a guy about to get knocked out to the Heavyweight Champion of the World. He was only in that fight because the guy who was originally set to fight Anthony Joshua failed his drug test THREE TIMES.

Now, every news outlet on the planet is trying to score an interview with Andy Ruiz Jr. as it’s one of the coolest sports stories of 2019, and one of the most exciting things to happen in the sport of Boxing in decades. Andy appeared on Jimmy Kimmel Live last night where he discussed the impact of becoming the first Mexican to claim the Heavyweight Champion of the World title belt, how he got to this point and the inevitable rematch with Anthony Joshua.

OMG! OMG! I cannot believe this S$&@$! Anthony Joshua — holder of 3 belts, gets TKO’d by Butter Bean…….I mean some dude named Andy Ruiz JR. What a damn disgrace. Joshua looked completely gassed! More fatigued than hurt! Now how in the Hell did you let that happen? How?

Andy Ruiz Jr. responded to Stephen A’s tweet and pretty much said to put some respect on his name because Stephen A. Smith was out of his lane, isn’t a boxing expert, and knows nothing about Andy’s career (which are THREE VALID points).

Stephen A. Smith then responded to Andy Ruiz Jr. and tried to act like he was misquoted and didn’t trash talk in his first tweet which anyone looking at Stephen A. Smith’s tweet can see is plainly wrong. I don’t know what TF Stephen A. Smith is trying to do here when everyone can see what he said.