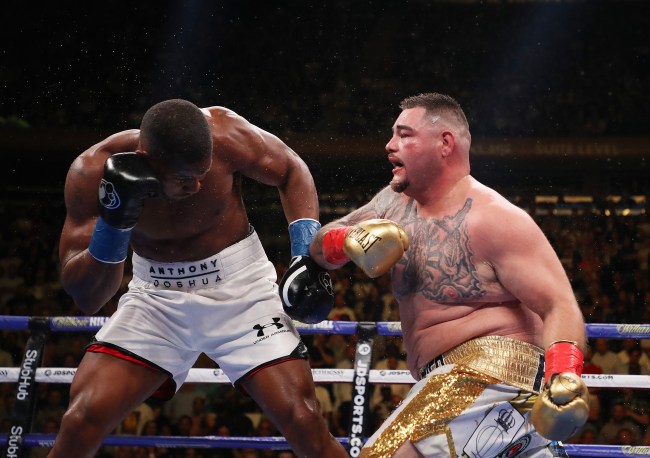 The good news for Andy Ruiz is that he became the first person of Mexican descent to become world heavyweight champion after defeating Anthony Joshua, who was 22-0 with 21 knockouts, in one of the biggest upsets in recent memory. The bad news is that he can’t log on to social media or speak to a reporter without being reminded that he has the body type of a Best Buy Geek Squad employee.

Andy Ruiz explaining to his trainers how he is going to beat Anthony Joshua. #AJvsRuiz pic.twitter.com/CONzc1NEAS

Anthony Joshua's US debut ends in disaster. Knocked out by a late notice replacement who looks like that! Andy Ruiz just pulled off one of the biggest upsets in recent memory. #JoshuaRuiz

One of the biggest names to take a shot at the 29-year-old’s 268-pound frame was none other than Stephen A. Smith, who seemingly just this week became a massive boxing fan.

After the fight, Mr. Smith went on an internet tirade expressing his utter disgust in a man of Ruiz’s hype and stature putting the kabosh on a potential megafight between Joshua and Deontay Wilder.

OMG! OMG! I cannot believe this S$&@$! Anthony Joshua — holder of 3 belts, gets TKO’d by Butter Bean…….I mean some dude named Andy Ruiz JR. What a damn disgrace. Joshua looked completely gassed! More fatigued than hurt! Now how in the Hell did you let that happen? How?

I’m sick over this. For myself! For fight fans. And especially for Deontay Wilder — who should’ve been the one administering this TKO. I’m so freakin disgusted right now!

I watched the fight 3x. Look, Ruiz is good. Solid boxer. Fast hands. But everyone’s missing the point: THE FIGHT we were all waiting for — Wilder vs. Joshua — is officially ruined. No one with sense believes Joshua has a chance vs him now, even if he goes back and beats Ruiz.

Ruiz, who stands to earn roughly $7 million for the championship fight, took a quick break from counting his stacks to respond to Stephen A.

@stephenasmith I encourage you to do your research before insulting my career. I know boxing isn’t your lane but if you are gonna talk about boxing please study and know what you are saying. https://t.co/xa4xSCZvBG

This sent Stephen A. into a predictable tailspin.

With all due respect Ruiz, I’d prefer to return the favor by encouraging you to do your own research or, more simply, to quote me accurately! By no means did I insult your career. Never even questioned it. In fact, I specifically recall acknowledging that you’re pretty damn good.

What I questioned was A.) How you looked physically (all due respect…..as has everyone else) and the fact that a megafight was ruined because Anthony Joshua got his butt whipped by you. A Megafight isn’t just about the fighters themselves, but who people are actually salivating

…..to see. Fair or unfair, the public was clamoring for Wilder vs. Joshua. That is not a knock against you. You’ve proven your worth and your time has arrived. But it came at the expense of a megafight that is no more. That is what I was saying. That it what I was decrying. And

I completely stand by that. You are to be respected for your skills. You’re damn good and you deserve our praise and respect. But Joshua getting completely outclassed by you is the latest reminder of how Boxibg repeatedly cheats us all by not giving us the fights we want WHEN….

We want them. If that is your definition of disrespect @Andy_destroyer1, I am sorry to inform you there is nothing I can do for you. Congratulations to you and mad respect. But forgive me if I’m more disgusted with Wilder vs Joshua RUINED than I am in celebrating you.#MayBE2moro

I’d empty my bank account to see Stephen A. go toe-to-toe with Andy Ruiz for 12 rounds. Can someone organize a charity event or something? Please and thank you.