Angels Employee Tells The DEA How He Provided And Used Drugs With Tyler Skaggs, Says He Told Team Officials About Skaggs’ Drug Abuse ‘Long Before His Death’ 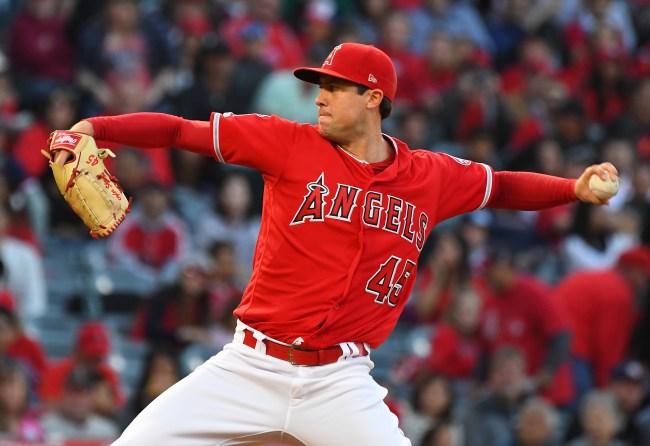 We’re beginning to learn more about the death of Angels pitcher Tyler Skaggs.

Last month, it was revealed that Skaggs, who was found unconscious in his hotel room, died after he choked on his own vomit after taking fentanyl, oxycodone and alcohol.

Skaggs, who was found dead in his hotel room on July 1 at the age of 27, had the opioids fentanyl and oxycodone in his system along with alcohol, according to a toxicology report by the Tarrant County (Texas) medical examiner’s office. The death was ruled an accident.

In official parlance, the cause of death is listed as a mixture of “alcohol, fentanyl and oxycodone intoxication with terminal aspiration of gastric contents.”

The report says Skaggs was found fully dressed on his bed and there were no signs of trauma, though a statement issued Friday by Skaggs’ family suggests an Angels employee might be involved — and even may have supplied the drugs.

Skaggs’ family released a statement saying they believe an Angels employee may have been involved in his death.

Tyler Skaggs' family says the death “may involve an employee of the Los Angeles Angels.” They hired Rusty Hardin, who represented Roger Clemens in matters relating to the Mitchell Report. Full statement has been available @latimes: https://t.co/5t7tZaaiB1 pic.twitter.com/PlzFSZikiu

Now we’re learning that Angels director of communications Eric Kay has told the DEA that he provided and did drugs with Skaggs in the past and how had told the team about Skaggs’ drug abuse “long before his death.”

BREAKING: Angels employee tells DEA about extensive opioid use with Tyler Skaggs, that he told two team officials about Skaggs' abuse, and named other players as having used opioids, sources tell OTL.https://t.co/YGmF58mX7M

A public relations employee for the Los Angeles Angels told federal investigators that he provided oxycodone to Tyler Skaggs and abused it with him for years, and that two team officials were told about Skaggs’ drug use long before his death, according to two sources familiar with the investigation.

Eric Kay, the Angels’ director of communications, also gave U.S. Drug Enforcement Administration agents the names of five other players who he believed were using opiates while they were Angels, the sources said.

Kay told investigators that he gave Skaggs three pills a day or two before his death but did not think the pills were the same ones he took the day he died.

Kay told investigators he illegally obtained six oxycodone pills and gave three to Skaggs a day or two before the team left California for the road trip to Texas, according to the two sources. Kay told DEA agents he does not think the pills he obtained for Skaggs were the same ones the pitcher took the day he died because Skaggs typically would ingest the pills immediately after receiving them from Kay, the sources said. Skaggs also texted Kay the day the team left for Texas seeking more oxycodone, a request Kay told investigators he was unable to fulfill, the sources said.

Kay told DEA investigators that hours before Skaggs’ death in July, Skaggs was in his Southlake Hilton hotel room and texted Kay to visit him, according to a source familiar with what Kay told the DEA. Kay also told investigators that Skaggs snorted three lines of crushed opioids in front of him, the sources said. Kay recognized that two of the lines could have been crushed oxycodone, but the third was not a substance he recognized, the sources said. Kay said he did not take any drugs despite being offered them by Skaggs, the sources said, because he was on a medication that would have negated the effects

The two Angels officials that were mentioned by Kay both denied knowledge of Skaggs’ drug abuse.

According to the two sources familiar with what Kay told DEA investigators, Kay told agents that he had first mentioned Skaggs’ use to Mead in 2017. In addition, Kay told investigators about a second Angels official who knew of Skaggs’ use.

“I have had a lot of conversations with Eric Kay about a lot of things, but opioids and Tyler Skaggs were not one of them,” Mead said. Asked if he was ever aware that Skaggs used opioids before his death, Mead said, “No.”

Angels team spokesperson Marie Garvey told Outside the Lines that the second official also denied knowing about players ever seeking drugs or Skaggs’ use of them. “We are shocked to hear these reports. … We had no prior knowledge of Tyler or any other member of the Angels organization having abused opioids or any narcotic and continue to work with law enforcement to get answers.”