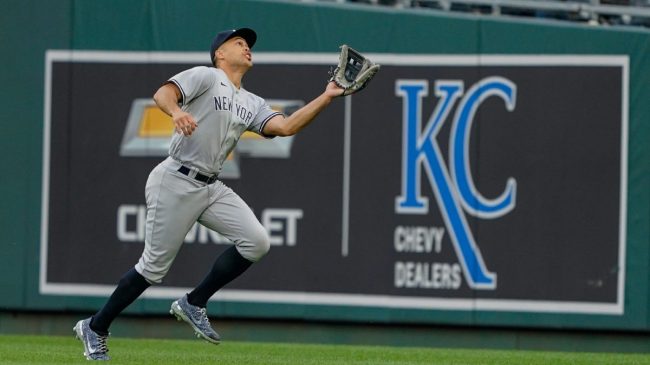 Yankees announcer John Sterling has been making headlines this season for all the wrong reasons.

The longtime play-by-play man has been known for slip ups in the booth, and on Monday night, he provided listeners with another hilarious botch job.

In the second inning of a 0-0 game, Yankees outfielder Giancarlo Stanton made an impressive leaping catch to take a hit away from Matt Chapman. Had the play not been made, Chapman easily slides in with extra bases, probably winding up on second base with a double.

But that’s not how Sterling saw it.

The announcer not only misses the snag, but he then makes a home run call as he expects to watch Chapman trot around the basepath. When he sees Yankees pitcher Jordan Montgomery clapping in celebration, a brief moment of confusion ensues.

After initially thinking the ball had left the park, he sees Chapman head back to the dugout rather than round the bases.

“They’re all waiting, why are they waiting?”

You can hear the viewer in the video bluntly say, “because Stanton caught the ball.”

Once he figures out that Stanton had made the play, Sterling goes on to applaud the outfielder’s effort (though he still thinks the ball would’ve left the park had he not made the catch).

It’s not the first time we’ve heard a slip from the announcer. Earlier this year, in another play involving Stanton, he made a similar mistake.

Luckily for the Yankees, the home run call was an error. New York left with a 3-2 win on the road against a divisional opponent.