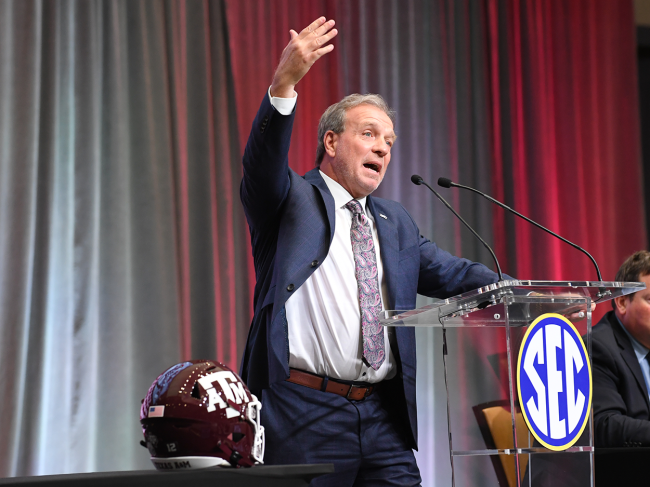 Although the COVID-shortened season was successful and ended with a No. 4 ranking, A&M could not replicate that success last fall after being ranked as high as No. 5 in the preseason polls. A win over Alabama was impressive, marking the first time that a former Saban assistant had ever beaten Saban as a head coach, but the 8-4 record was a very “meh” finish to the year.

After landing the greatest recruiting class of all-time in 2022, the hype in College Station is louder than ever. Texas A&M believes that it is on its way to national championship contention in the near future, if not this year.

But anonymous SEC coaches don’t agree with the positive outlook for the Aggies.

In a conversation with Athlon Sports, multiple coaches in the Southeastern Conference spoke about the state of the A&M program without their names attached. NIL was a significant talking point, as was the potential to take the next step.

One coach talked about their big game abilities.

“Their rep is that once they lose that one big game, they’re not the same. When it’s not all on the line, you don’t ever really get their best.”

Another coach asked questions about Fisher’s history with quarterbacks and what Texas A&M is going to do at the position this fall. He also brought up the amount of money allegedly spent to land a five-star prospect.

“What’s the QB situation going to be? They took a lot of sacks last year, but they didn’t really turn the ball over much, so they stayed in games. If you take Kellen [Mond] out, Jimbo’s history with picking QBs isn’t as great as people think. He has a huge decision here; the guy they might not want to play, Max Johnson, is probably the one with the most experience. But they didn’t spend all the money on Conner Weigman to keep him on the sidelines, did they?”

NIL was then reiterated by another.

“The NIL culture is like a science experiment here. How’s it going to work with the rest of the locker room?”

The loudest, most vicious quote about Texas A&M was in regard to the program’s history of 8-4 records.

“Jimbo Fisher might be a mad genius when it comes to media because they get talked about alongside Georgia and Alabama, and they’re every bit an 8–4 program. He knows it, too, but I think that’s part of the plan.”

Savage. There was no holding back and it does not seem like Fisher or the Aggies are on anyone’s good side within the conference.