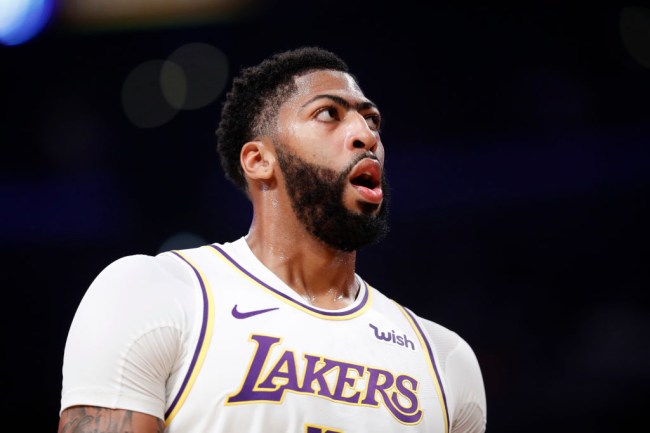 Anthony Davis’ performance against the Grizzlies on Tuesday night wasn’t just special, it was extremely rare when you sit back and break down the numbers.

Davis finished the night with 40 points and 20 rebounds in 31 minutes played. What’s interesting is that he didn’t have a good night shooting, at all actually, going 7-for-17 from the field. The majority of those 40 points came at the free-throw line as he went 26-for-27 at the charity stripe, which is where Wilt Chamberlain comes into this entire equation.

Chamberlain was the only player in NBA history to go for 40 points, 20 boards and make over 25 free-throws in a single game and it just so happens it came during his 100-point night back in 1962. Talk about insanely elite company for Davis.

Of course the biggest gripe Davis has received after his big night is big-whoop, he scored 40 with 26 of those coming from the free-throw line, but seeing as how he and only one other person in the history of the NBA share a stat-line like that is incredibly impressive.

His 40-20 night also marked the first time a Laker has posted those types of numbers since Shaquille O’Neal did it back in 2003. It’s safe to say O’Neal never hit 26 free-throws in a game as he was one of the worst free-throw shooters in the game. Davis getting to the line is one thing, but sinking free-throws at that rate is something we rarely ever see from big-men in the league.

Davis is averaging 28.8 points and 12.5 rebounds per game as the Lakers sit at 3-1 on the year. The former Kentucky standout is also ticking at an 88.9% rate from the line while averaging 13.5 free-throw attempts per game only trailing James Harden (16.0) in the NBA.

If Davis posts stat-lines like he did against the Grizzlies while LeBron James continues to do his thing the Lakers are going to be a legitimate problem for the rest of the league.