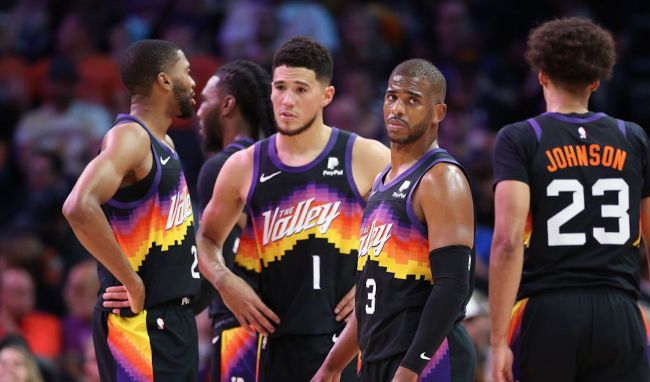 The Phoenix Suns, who were the #1 seed in the Western Conference and had the best regular-season record in the NBA, were bounced out of the playoffs on Sunday following a pitiful performance against the Dallas Mavericks, who beat the Suns by a score of 123-90 in their own gym.

Following the game, members of the Minnesota Timberwolves (who were knocked out of the playoffs by the Memphis Grizzlies in the first round) such as Anthony Edwards and Patrick Beverley took to social media to take shots at the Suns.

The famously outspoken Beverley took to Twitter to fire shots at Chris Paul, even implying that he faked an injury following the game:

Yal stay locked in, let’s see who pulls the fake hurt move down a dub

What u mean deserve why does he deserves it more?? https://t.co/Y0t0Sxbabu

Edwards, in his second season in the league, also took to social media to dance on the Suns’ grave as he clowned on them in a since-deleted Instagram story, calling their Game 7 performance a “disgrace”:

Following the dominant win over Chris Paul, Devin Booker, and the Phoenix Suns, Luka Doncic and the Dallas Mavericks advanced to the Western Conference Finals against Steph Curry, Klay Thompson, Draymond Green, and the rest of the Golden State Warriors. This season marks the first time since 2011 that neither of the Western Conference’s top two seeds reached the conference finals.

The 2022 Western Conference Finals will kick off on Wednesday night at 9 p.m. when the Mavericks travel to the Bay Area to take on the Warriors in Game 1.

RELATED: Lil Wayne Gets Mocked For Sitting Courtside To Watch Suns Lose Days After He Took A Shot At Luka Doncic