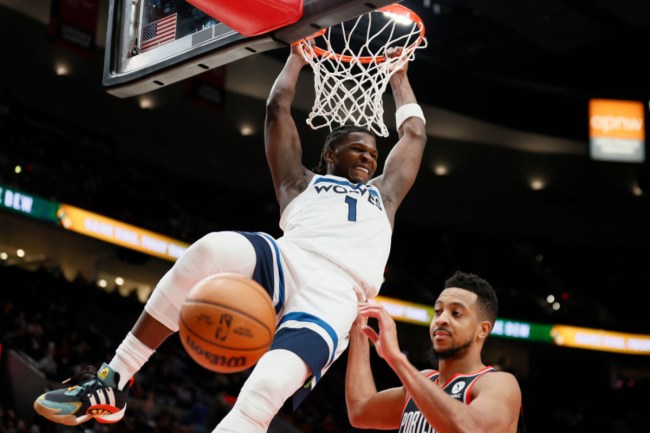 When it comes to players that NBA fans would most want to see participate in the Slam Dunk Contest, Anthony Edwards has to be at the top of everyone’s lists. He’s got a unique style above the rim and inflicts damage on the rim each and every time he throws it down.

Edwards would undoubtedly put on a show in the dunk contest and would undoubtedly be the favorite if he was inserted into this year’s group of dunkers. There’s no question that the NBA has asked him to compete, so why won’t he?

It turns out that Edwards doesn’t exactly like the style of dunking it takes to win the Slam Dunk Contest, he prefers putting defenders on posters when he rises up.

“No, I’m an in-game dunker,” Edwards said when asked if we’ll ever see him compete in the dunk contest. “I don’t have dunks in my bag like that, for like tricks, I’m not really a big trick guy, I just like to dunk on people.”

Ant Edwards: "I feel like the dunk contest is for tricks, people who can go up there and spin. I can't do all that. I wanna dunk on somebody."

You have to tip your cap to Edwards for both his honesty and confidence here. Also, he’s not lying when he say he just likes dunking on people, he’s done his fair share of that since he was drafted first overall by the Minnesota Timberwolves in 2020.