Dr. Anthony Fauci Has Some Excuses For Why His Terrible First Pitch On Opening Day Was As Bad As It Was 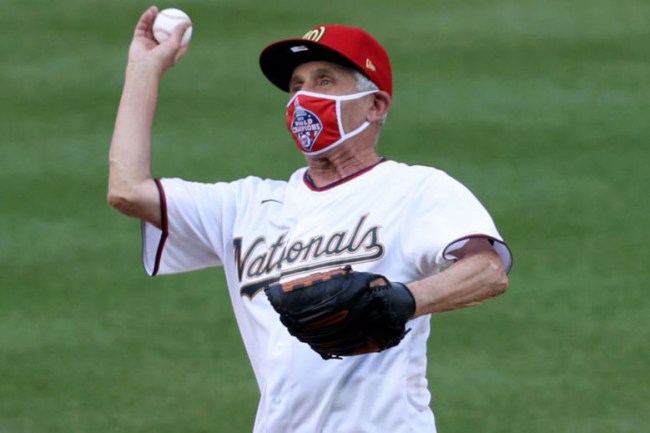 The only time I’ve been the center of attention at a sporting event was when I attended a minor league baseball game as a kid and got the chance to play a game they legally couldn’t refer to as Card Sharks for a chance to win a duffel bag emblazoned with the logo of a local credit union that I’m pretty sure was bigger than the team’s.

Based on the stress that came with being in the spotlight in a stadium that was home to maybe 1,500 people, I can’t imagine what it’s like to be selected to compete for a prize that sets the marketing department back more than $7. I certainly wouldn’t say no to the chance to try to shoot a puck through an impossibly tiny hole at the other end of the ice with tens of thousands of dollars on the line but my worst fear is pulling a Mac in front of tens of thousands of fans.

If would also be pretty dope to throw out the first pitch at an MLB game but it’s hard to get an invite unless you do something particularly noteworthy or are diagnosed with a terminal disease. However, if you’re lucky (or, in the case of that second one, unlucky) enough to get that opportunity, you then have to deal with the pressure to avoid nailing someone in the nuts with an errant pitch or achieving the same level of infamy as 50 Cent.

On the other end of the spectrum, you’ve got people who manage to throw an absolute dart and there may never be a more notable example than George W. Bush, who managed to toss a perfect strike while toeing the rubber and wearing a bulletproof vest at the World Series less than two months after 9/11.

Last week, another government official tasked with overseeing a national crisis was tapped to usher in this year’s abbreviated season, as Dr. Anthony Fauci was given the honor of throwing the first pitch at a Nationals game on Opening Day.

Sadly, it did not go very well.

The good doctor eventually spoke with The Wall Street Journal to shed some light on what went wrong and he came armed with a couple of excuses. The first one was the state of his arm, as Fauci told the outlet he tried to shake off decades’ worth of rust by practicing for his big moment a couple of days before it arrived only to wake up the following morning to discover his arm was “hanging down around [his] shoes.”

He also hit a bit of a road bump after arriving at the ballpark, as it appears he’d practiced on a Little League mound, which is about 15 feet closer to the plate than a regulation one. He eventually opted to throw from around fifty feet and decided to “try to throw a bullet” after realizing the catcher was further away than he anticipated before regretting it immediately after the ball left his hand.

At least he can take solace in knowing it still wasn’t as close to as atrocious as 50’s.