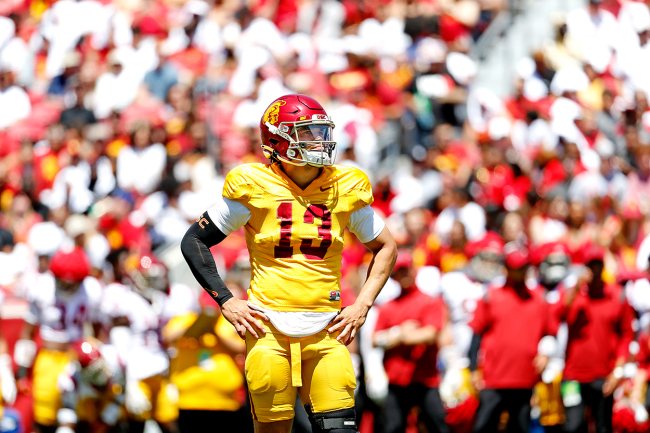 After years of being just outside of national relevancy, the spotlight on USC football is shining as bright as it was during the early 2000s. The Trojans hired Lincoln Riley away from Oklahoma in the fall and have been on a tear.

Not on the gridiron, obviously, but on the recruiting trail and in the transfer portal.

Since Riley’s arrival in Los Angeles, USC has signed 20 transfers, all of which came from Power Five schools and were highlighted by Caleb Williams and Jordan Addison. It also signed one five-star recruit, four four-star recruits and three three-star recruits in the Class of 2022.

And as things currently stand, the Trojans have the No. 10-ranked recruiting class in the country for 2023 with two five-stars, four four-stars and three three-stars already committed. Needless to say, the work put into getting top talent to play at the most historic program on the West Coast is paying off.

But it’s not done yet. USC has its eyes on quite a few top prospects in the upcoming class and its top players and commits are getting involved in the effort.

High on the Trojans’ recruiting board is five-star linebacker Anthony Hill Jr., who hails from Denton, Texas.

He is the No. 1 player at his position and has 33 offers, with Texas A&M, Oklahoma, Alabama, Texas and USC in the mix. Hill visited Los Angeles over the weekend and took some fire visit photos in the L.A. Memorial Coliseum.

Visual media plays a crucial role in today’s recruiting and the Trojans are on the cutting-edge. Here are the results of the shoot:

#USC five-stars recruiting the No. 1 linebacker in the country https://t.co/9XzYmBX5Dd pic.twitter.com/0Zmgusmocu

Clearly, the momentum that is building at USC is no secret. Every single facet of the recruiting operation is firing on all cylinders and the Trojans’ players and commits are going to work as well.

It will be hard to pull Hill Jr. away from Texas A&M, so its seems, but if USC can get him to leave the state, it would be a huge testament to the program’s success in the immediate future.