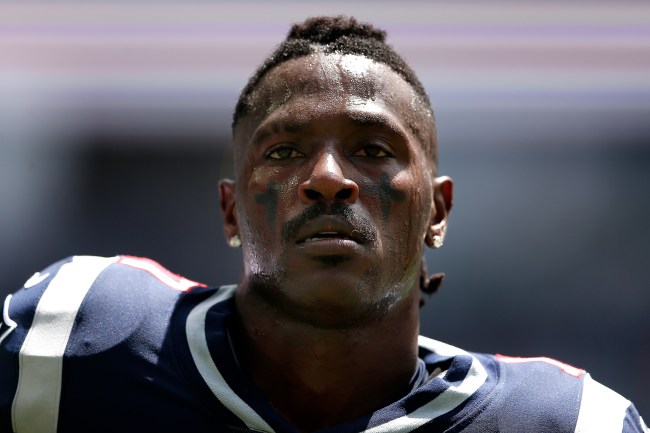 Earlier this week, Sports Illustrated spoke to a woman who accused Brown of making unwanted sexual advances on her after he hired her to paint a mural in his home.

After arriving at his home, the woman at first thought nothing of Brown’s flirtations—an uncomfortable yet constant reality of her professional life—and she was thrilled by his willingness to share her work on social media; he even posted a live video showcasing her progress. “It was very exciting, to have this person interested in my work,” the woman says. “He acted like he trusted me and he let me do my thing.”

On her second day, however, the atmosphere curdled. The artist says at one point she was in a kneeling position while painting and turned to find Brown behind her, naked, holding a small hand towel over his genitals. “He was flirty with me but I paid him no mind because I was there on business, plus, I had already seen him with multiple girls in the short time I was with him,” says the woman. “I was about 40% done on the second day, and I’m on my knees painting the bottom, and he walks up to me butt-ass naked, with a hand cloth covering his [penis] and starts having a conversation with me.” She took it as a clear sexual come-on. “Unfortunately, I’ve been tried [by men] a lot of times, so I just kept my cool and kept painting,” she says. “After that, it all ended abruptly.”

The woman now claims that after the story ran Brown tagged her in a group text chat where he asked his associates to find any info on her. In the texts, Brown included pictures of the woman’s children and called her “broke”.

The texter described the artist as a “super broke girl” and asked someone he refers to as “Eric B” to “look up her background history.” He then sent a screenshot of an Instagram photo she had posted showing the faces of her young children, adding “those her kids… she’s awful broke clearly.” 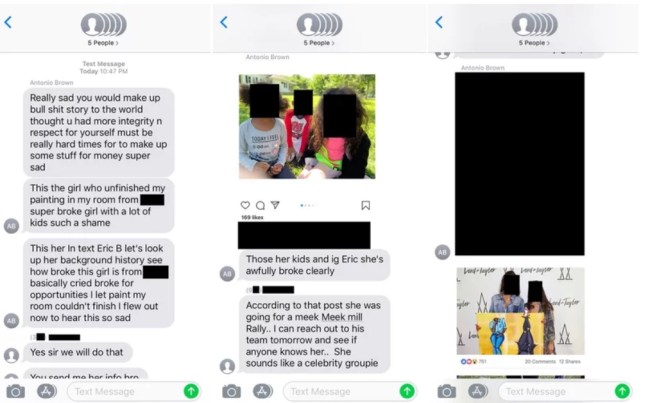 Sports Illustrated confirmed that the number in the text messages came from a number Brown used in the past to communicate with the woman.

Sports Illustrated has reviewed screenshots of the texts and confirmed that they were apparently sent from the same number Brown used to communicate with the artist in 2017, which was provided to her in a direct message from his verified Instagram account. Brown’s lawyer, Darren Heitner, who was included in the group text but did not respond to the messages, said he had not advised Brown to communicate with the woman. He otherwise declined comment.

The woman’s lawyers have now contacted the NFL in hopes that they can get them to pressure Brown to stop intimidating her.

“Our client … is understandably frightened by these text messages, which are clearly intended to threaten and intimidate her,” the lawyer wrote. “While she certainly qualifies as a ‘starving artist,’ she has never approached Mr. Brown, nor will she, about seeking money to compensate her for his sexual misconduct, contrary to his allegations in the text messages.”

The NFL responded to the letter within the hour, arranging for a phone call between investigators and the attorneys for the artist, according to a source with knowledge of the arrangement. The Patriots and Brown’s agent, Drew Rosenhaus, did not respond to SI’s requests for comment.

Brown was asked by Sports Illustrated to confirm or deny if sent the texts to the woman. This was his answer.

Asked via text to confirm or deny the details of the woman’s charge of intimidation, the respondent at the number purported to be Brown’s replied “foh clown.” (“FOH” is a popular acronym for the phrase “get the f— out of here.”)