Antonio Brown Addressed Whether He Thinks He Has CTE, Gives Confusing Response 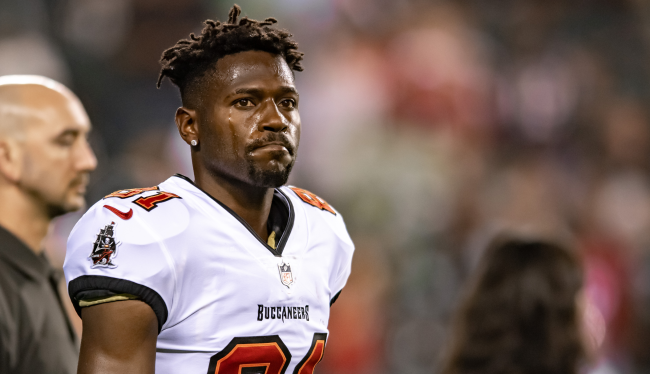 Numerous fans, former players and members of the media have wondered out loud if much of the trouble Antonio Brown has found himself in over the past three-plus years has anything to do with him possibly having suffered brain trauma or because of CTE.

Just this week, former NFL player turned analyst Rodney Harrison made a strong statement that he believes Brown is suffering from CTE. He used the often-cited hot from Vontaze Burfict back in 2016 that Brown took as the starting point for AB’s issues.

On Friday, during his rambling, mostly incoherent interview with the Full Send Podcast, Brown was asked about CTE. His response showed what appeared to be a full lack of understanding of how CTE works.

“CTE, you can’t scan a person for CTE ’til they’re dead, first off,” Brown responded.

“When you frickin’ die they test for CTE! So how you going to say a player that’s living in real time, who putting up real stats, who’s standing for real purposes, who’s doing real things, got CTE?

“Did you hear the Tampa Bay Bucs talking about Vincent Jackson’s CTE?!”

“You only contact CTE when you die, bro. So what are you asking me what I got when I’m living?”

Brown then explained that he’s an NFL wide receiver that manages stress well and that his blood level “is the equivalent to a Navy Seal.” He then added that it means he manages stress.

Then Brown decided to try and compare himself to Vincent Jackson, who like Brown, played in the NFL for 12 years.

“Vincent Jackson, he used to play for the Bucs. He died from CTE. And the Bucs, on the other hand, say AB’s crazy, he may have CTE, he needs to get some help.

“You think these people care if I got CTE? Did you see them do anything for Vincent Jackson like they did for Demaryius Thomas? Did they put his number on the field?”

Brown said they didn’t do that because it would be bad for business.

The full conversation begins at around the one hour, six minute mark.