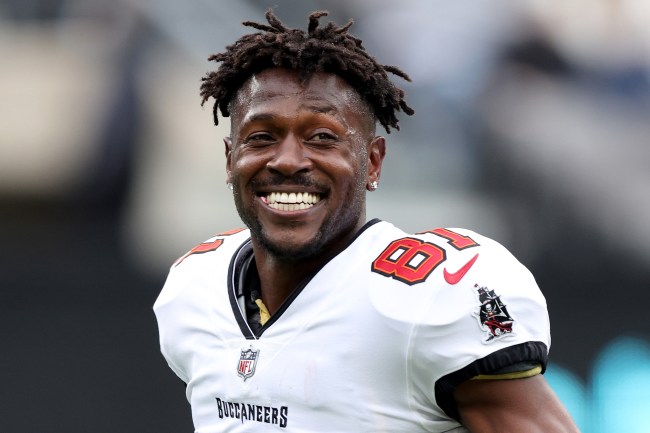 We all know Antonio Brown’s meltdown at MetLife stadium during Tampa’s Week 17 game against the New York Jets will forever be one of the most infamous moments in sports history.

The whole world watched as AB shed his pads and jersey as he walked off the field to the tunnel.

If you pay close attention to the beginning of the video of AB’s meltdown, he actually throws his undershirt and receiving gloves into the crowd.

In a weird turn of events, one of AB’s gloves that he threw into the stands has ended up for auction at Lelands Sports Memorabilia and Card Auctions.

Antonio Brown Glove from Meltdown Up for Auction

The right-handed Nike glove went live for auction on Lelands website on January 30th at 7 PM EST. The starting bid began at $81 (which is the number AB wore on the Bucs).

Notably, the Antonio Brown 'meltdown' glove being auctioned off is actually a Raiders glove, with their logo blacked out.

Evidently, the other glove didn't make it into the stands https://t.co/B00iFHVutI pic.twitter.com/NoVrwMaBsB

There’s no telling how much AB’s glove will go for, but considering the history that’s connected to the glove we’re guessing it’s going to be a significant amount.

A related story that comes to mind with AB is the lone touchdown ball he caught from Tom Brady when they were on the Patriots. The TD came from a September 15th game in which the Pats won 43-0 against the Miami Dolphins.

AB posted to Instagram shortly after the game he would be giving the ball away to one fan in the comments.

Weeks went by after that post and nobody heard if AB gave the ball away or not. It wasn’t until a woman on Twitter mentioned AB asking if he still had the ball that Brady threw to him.

AB made a blanket claim members from the Patriots’ training staff stole the ball because they had “so much jealousy” and never sent AB his gear after he was released from the Patriots midseason.

Trainers from Pats stole ball so much jealousy never sent with my stuff https://t.co/8mgAJqZlSx

There’s no telling where that ball might be, but maybe one day we will see it resurface.