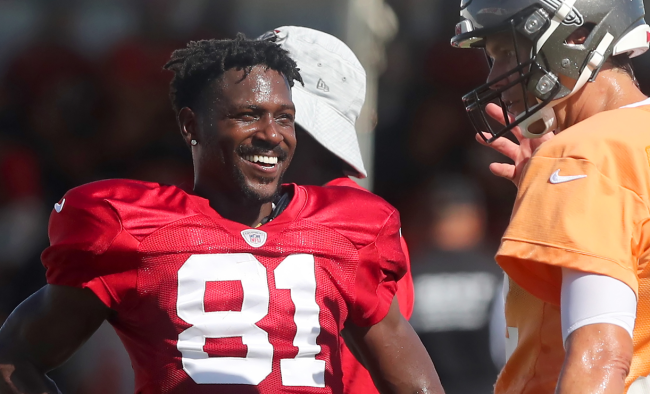 Antonio Brown has been VERY busy over the past 24 hours on Snapchat. I lost count after the first three or four dozen things on his Snapchat story how many times he has posted.

Among the multitude of things AB shared were videos from his time with the Raiders, visiting PSG in Paris, him at a Pro Bowl with Derek Carr (more on that in a moment), hanging out with DJ Khaled, and a photo of someone wearing the t-shirt he is selling with a picture of Tom Brady’s ex-wife Gisele Bundchen hugging him.

Well, he might have smallest bit of chill because at least the image appears to no longer be on his Snap.

Of course, the internet being the internet, meaning anything you share on it is forever, the picture is still out there.

Reactions to Brown sharing the photoshopped nude pic of Gisele by NFL fans were pretty much what you would expect. Very little Antonio Brown does these days surprises anyone.

@AB84 out here leaking a photo of Gisele looking like this Creed album cover pic.twitter.com/z0joBhaX0S

“How many times this man trying to test the goat?” another fan asked.

Antonio Brown posted this poorly photoshopped nude pic of Gisele on his snapchat this morning. Dude is 🦇💩 pic.twitter.com/E5kmnDdnA3

Why does Antonio Brown continue to mess with Tom Brady?

Well, according to him, “People go through a divorce everyday. What about me? What about when I’m in the news and people say I’m crazy? It’s just a picture from the Super Bowl. His divorce is his personal life, I ain’t got nothing to do with that bro. A lot of the things I’ve said tonight you guys are never going to understand. How am I going to make you understand if I’m telling you what I think and you can sort out what I think? Just so you can marginalize what’s respect and what’s not?”

In addition to the fake photo of Gisele, Antonio Brown also addressed his odd beef with Derek Carr

On Sunday, after tweeting out a shot at Aaron Rodgers on Thursday, AB decided to go after Raiders quarterback Derek Carr.

Brown tweeted out another obviously photoshopped image (is that his new thing?) trying to troll Derek Carr for supposedly being fat.

However, over on Snapchat this morning, Antonio Brown shared an old video of him praising Derek Carr at the Pro Bowl.

“It’s been an honor catching the ball from him. I had the honor of catching two passes from him already.

“Told him I need the ball more, but…” Brown joked.

“He’s a great young quarterback, a young champion, all the fundamental tools to be one of the greatest.”

Trying to figure out what Antonio Brown is thinking when he does these things is literally impossible.