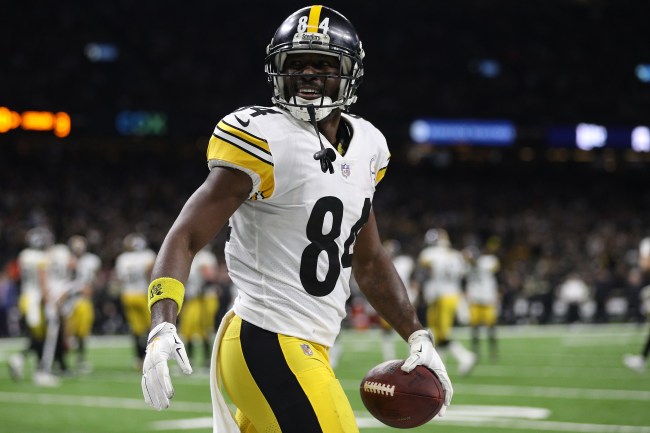 Antonio Brown and the Pittsburgh Steelers know that they need some help to get into this year’s NFL Playoffs after a season that saw lots of ups and downs. The usually consistent Steelers went from underachieving early in the year, to winning six games in a row during the middle part, and are now left hoping that one of their biggest rivals, the Cleveland Browns, can beat another one of their rivals, the Baltimore Ravens, to even get into the postseason.

And, because Antonio Brown knows the circumstances for his team to reach the playoffs, the all-world receiver had a little fun on Twitter yesterday to show his support for the Browns, making the slightest uniform adjustment. Take a look below.

who else has their #84 @browns jersey ready for Sunday? pic.twitter.com/09WIfhCKPM

You’ve got to love Antonio Brown for doing sh*t like this. And, chances are, the wideout is going to be the biggest Cleveland Browns fan this weekend, as a win for them over Baltimore plus a win by the Steelers over the Bengals will punch a ticket the the playoffs for Pittsburgh.

As a Browns fan, I’ll happily take more fans. But there’s one question that has to be asked: Is it more important to Cleveland players to win and finish with an 8-7-1 record — which would be a huge improvement over last season’s 0-16 year — but (potentially) help the Steelers make the playoffs? Or would they be better off sh*tting the bed so that the Ravens, not Antonio Brown’s Steelers, get into the playoffs? Both teams are hated by the Dawg Pound, so here’s to Baker Mayfield and the boys going out and mopping the floor with the Ravens.

For the time being, though, it’s clear that Antonio Brown and the rest of the city of Pittsburgh will be cheering for the Cleveland Browns — which seems weird to even think about.