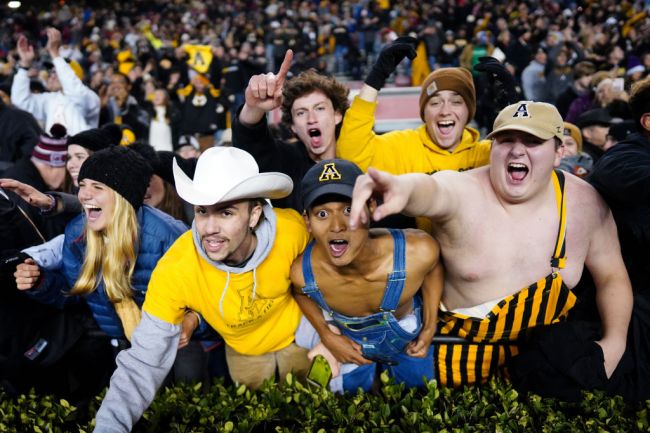 Attending an Appalachian State football game at Kidd Brewer Stadium has been something I’ve wanted to do ever since the Mountaineers took down Michigan on the now-famous field goal block in 2007. I finally crossed it off of my bucket list last night and it was one of the coolest Gameday experiences that I’ve ever had.

For starters, Boone, North Carolina is a special place. It is equal parts mountain town and equal parts college town, which makes for a super unique dichotomy that results in a grungy, granola, country and preppy feel all wrapped up into one.

Beyond the people, who are incredibly kind and welcoming, the campus is gorgeous and it feels like everything is newly-renovated.

The highlight, of course, was Kidd Brewer Stadium, a.k.a. The Rock.

Cut out of the Appalachian Mountains, the stadium is super unique and the fans are passionate. In particular, the student section stretches all the way across the first 20ish rows of stands right behind the home bench, which is something I haven’t seen before, and they were especially rowdy for a Thursday night game.

Even the tuba section popped off!

App State ended up taking down its long-standing rivals Marshall in a thriller of a game that came down to the last five minutes and the student section stayed fully intact for all four quarters. It was awesome.

As the game began to wind down, prior to a crucial third-down stop, ESPN cut to commercial (for the eight billionth time, the game took nearly 5 hours) and the stadium DJ took advantage of the 3.5-minute break. Luke Combs’ smash hit ‘Beer Never Broke My Heart’ began to play over the sound system and the entire stadium erupted.

If you are unaware, Combs is an App State alumnus— almost. He attended the university for seven of eight semesters before dropping out and pursuing his music career.

Obviously, it worked out.

Earlier this year, after the Mountaineers won their season opener, Combs partied with the team in the locker room and they all belted out ‘Beer Never Broke My Heart’ in full voice. He played his first-ever stadium show at The Rock two days later.

Needless to say, App State and Combs have a special relationship, so when the song came over the loudspeakers on Thursday, every single fan in attendance went bonkers and sang along.

It was one of the cooler moments that I’ve ever experienced at a college football game and it will give you real chills.

If you ever have the opportunity to get to a game at The Rock, take it. Just make sure that you know every word to ‘Beer Never Broke My Heart.’